How can I reward dungeon masters that take risks?

I am working on a MORPG project featuring essentially two major roles: adventurers and dungeon masters. My concern is about balancing the two roles.

For those who have heard of it, the principle is inspired from the French comics Dungeon. The business model of a dungeon, as stated in the comics, is the following: dungeon masters place treasures in heavily guarded dungeons, to lure in adventurers seeking fame and fortune. While some of them succeed, most die in the process, dropping valuable items which joins the pile of treasures of the dungeon, further attracting more adventurers. Dungeon master make a living by collecting the right amount from these drops to create new rooms, pay mercenaries, fetch new creatures, breed dragons and whatnot.

Adventurers are quite classic: they are combat oriented characters that can attack monsters or fellow players and earn XP, items and money in the process, gradually making them stronger.

Dungeon masters are trade oriented. Their difficulty is balancing budgets: treasures and dragons are expensive. Now, I already expect a sort of equilibrium among dungeon masters because dungeons that are either too hard or too easy are naturally penalized (low attempt rate or low kill rate, respectively). DM vs DM balancing: check.

Since PvP combat is enabled in dungeons, there is also a competition among adventurers pushing weak players to stick to easy dungeons that offer little reward to more advanced players. Adventurers vs advanturers balancing: check.

However there is one specific imbalance between the two roles that I am trying to solve: adventurers have a bias toward attempting dungeons above their league, because even if they die (dropping some items and respawning outside the dungeon), they will have gained some XP in the process. This is good because it rewards risk-takers. On the other hand, dungeon masters do not have any advantage of this kind: if an adventurer completes the dungeon and escapes with their share of the treasure, nothing is gained. This would be a pity if it lead dungeon master to be too cautious about their defenses, killing the probability of ever completing the dungeon. Adventurer vs DM balancing: problem.

Hence my question: what reward mechanism could I introduce that incitates dungeon masters to maintain a small but non-zero winning probability?

This system might be more auto-balancing than you think.

Players in MMORPGs will always go to the dungeon which gives them the most reward per hour of playtime. So if a dungeon master creates a dungeon which has a very low completion rate, then players will avoid that dungeon and rather go to an easier one. Dungeon Masters will have to compete with each other to create the dungeon with the largest reward for the smallest risk in order to attract the most players. But on the other hand, they must not be too generous, or they will start to lose money because nobody dies in their dungeon.

This is quite similar to how the casino industry operates. If you would own a casino, then you would want players to lose as often as possible so you make more money. So do you only offer games which are almost impossible to win? No, because if your games are too difficult, then the players will go to a different casino where the house edge is smaller. So you have to find a compromise. The result is an equilibrium where all casinos in a city will offer games with about the same house edge.

All you need to do for this system to work is create transparency: Players need to be able to tell what rewards a dungeon offers, how many players attempted that dungeon, how many were successful and how long they took.

On the other hand, you also want to encourage DMs to create dungeons which are rewarding, not frustrating. So if you notice that DMs need to build killer-dungeons in order to make a profit, then you should abandon the idea that dungeon raiding is a zero-sum game between player and DM. Consider ways to also reward the DM for successful completions. Not as much as an unsuccessful one, but it should be possible to run at least a meager income from running an easy-mode dungeon. For example, you could reward the DM with a special resource for every monster slain in their dungeon. Or you could allow DMs to collect an entrance fee for their dungeon which is to be paid regardless of whether the run is successful or not.

I'm looking forward to building the most profitable dungeon ever in your game.

Philipp definitely brought several great insights that are worth considering.

One possible direct answer to your concern would be to disperse rewards at intervals according to a curve. 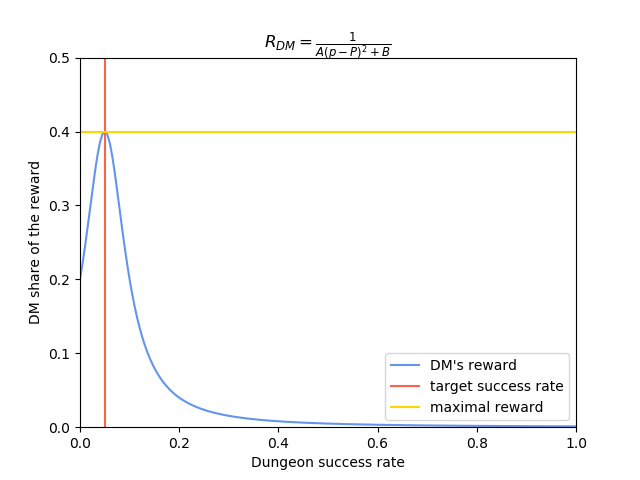 One note: Any zero-sum system will cause macro problems with the economy of the game. If there isn't money being generated but it's being spent (DMs on dungeon maintenance and improvement and adventurers on gear), then the money will just run out. With that in mind, you could simply add a factor to the disbursement to produce slightly more money on each run.

All that said, there will likely be a lot of autobalancing as DMs compete with each other to attract adventurers.

I agree with transparency, but success rate is not a good metric. If you have a hard dungeon that the high level guys like to farm, then a mid-level might see a 60% success rate and go in only to get stomped.

Instead they should be shown based on challenge rating (CR). If a dungeon kills a lvl6, a lvl10, & a lvl11, but a lvl9 and a lvl17 beat it, then you average the levels of adventures who succeed/fail and the find the average of those two numbers. (6+10+11/3=9 average failed adventurer, 9+17/2=13 average successful adventurer, 9+13/2=11) So, the dungeon would receive a challenge rating of 11. This way adventures would always know about what they are getting into.

The problem with transparency is if you know what you are getting into, losing a raid will be rare; so, to balance this your CR (and loot quality) is not fixed.

To keep things interesting a dungeon can have whatever sum value of loot they want to invest into it, but perhaps they have to push their CR up higher to unlock better rare drops. This will create a push pull between wanting to get farmed and wanting to be hard. The more you get farmed, the more the CR drops. This means you'll lose access to rare drops that attract high level characters, but if you CR does go down from being farmed, that means that dungeon will look easier than it is, luring in some ambitious noobs that you loot when they die... which pushes your CR back up, and the cycle continues.

I agree with Phillip on the most points he brought up, except that i dont see it that simple to balance. Just like in the casino, there will be some people who try a game again and again, but as every one knows, in the end, the bank wins.

In a game, that does not work. Why would a player attempt to do a dungeon over and over, if he realises shortly after, that he lost more than he could ever get out of it. Especcially with other players, who can just take their most desired objects. Only if you can get items, that really boost your stats immensly, players will stick to a dungeon. Expensive Unique Items, that a dm should only have in his hardest dungeon.

One thing is, if a dungeon gets played often, but not defeated nearly as often, than that could mean, that you get slightly better equipment out of that dungeon. A dungeon with a lower completion rate would drop slightly less, even using the exacte same enemies, traps, rooms etc.

On the other hand, if a dm also had something else to gain from players except of money and petty equipment, that they drop on death, then DMs could have another reason to have easier dungeons adventures can grind for simple stuff. For example, if players slays enemies, these enemies have a chance to come back stronger like Elite Monster. The more Monsters die, the higher the chance to get one of those. That may DMs might want "weaker" dungeons with weaker Monster, to get those Elite Monsters.

That way, even by making a net gold loss with that dungeon, he gains a value out of it.

A third thing is, you should see it a bit more like Super Mario Maker, where you build cool levels to show off. These Levels can be hard or easy, but the more stylish a level, the more play it will see. A poorly designed dungeon will see less play than a good designed dungeon at an equivalent difficult level.

Here is one possible solution I am not entirely satisfied with.

Creatures found in dungeons could have their own XP system, gradually getting stronger as they defeat more adventurers. The XP system for both creatures and adventurers would need to reward risky combats.That is: the stronger your opponent relative to you, the higher the XP gain.

In that case, having a dragon in the treasure room is useless if no adventurer climb up there: the dragon is costly and if it has never levelled up, it will be defeated easily the one time a strong player shows up.

In that sense, the best interest of a dungeon master would that all rooms be explored by players as close as possible to the level of their creatures, which are also the most likely to defeat them.

As stated earlier, I am not entirely satisfied. I am afraid this would incitate DMs to place very strong creatures at the very beginning of the dungeon so that they XP quickly. Perhaps this can be healed by ramping the XP reward steeply enough.

Not the answer you're looking for? Browse other questions tagged game-design mmo rpg balance or ask your own question.

5
How can I scale player/enemy stats to balance the difficulty just right?
1
How to design reward and points system?
3
How should loot be distributed across dungeon levels?
9
How to balance experience gain with player collaboration?
4
How can I design loot to be enjoyable to acquire and neither a chore nor frustrating?
3
How can I encourage population balance between two factions?
6
How to store relations between NPCs?
3
Can letting players take resources from others prevent inflation despite the lack of money sinks?