I'm working on an ARKit project where I need to manage the movement of an object (white box) on a plane (blue square). 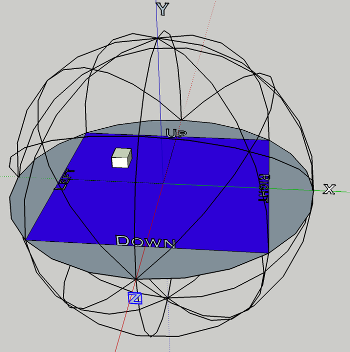 The characteristics of the environment are :

Movement of the box is handled through swipe movement on the device. Whatever the position of the user or the plane, a swipe has to move the box in the direction of the swipe relatively to what the user sees on the screen, which is not necessary the same direction in the coordinate space of the box (up on the device could be right in the plane if for example the user has moved 90° to the left of the plane, or if the plane has rotated 90° to the right with the user still in the original place, in the case of a starting point with the plane in front of the user as in the picture above). Possible combinations are infinite.

Intuitively, I would say that I need :

Is there an easier solution to achieve that ?

0
Moving along a flat plane with accordance to camera view
2
Rotate sphere in Javascript / three.js while moving along x/z plane
8
Routes on a sphere surface - Find geodesic?
3
Calibration of a 6 DOF tracking device
1
Need help with a complex 3d scene (using Ogre and bullet)
11
How to implement translation, scale, rotation gizmos for manipulating 3D object's transforms?
2
How to add constant force to player with sperical gravity planet.?
1
How can I calculate the new vector of an object trying to push into (move along) the ground?