We changed our privacy policy. Read more.
This site is currently in read-only mode; we'll return with full functionality soon. Follow @StackStatus or visit our status blog for more info.

how do I move an object based on rotation of another object?

This question is related to my other question about camera rotation. I hope its acceptable to ask a second question. I cannot figure out the math of how to calculate moving the camera to stay behind my player, based on the players rotation.

Step 2 the arrow is at 0,0 and turned 90 degrees to the right (facing east). The red circle should move to be "behind the arrow" aka to the left and up and at the same distance from the arrow as when it started. I am guessing that would be -5,0 in this case

Other Scenarios a) The arrow is at 0,0 and turned -30 degrees (turned to the left). The red circle should move right and up.

b) the arrow is at 0,0 facing south (180 degrees opposite of #1) and turns -30 degrees to right (on screen but left if you are the arrow). The red circle should move appropriately.

I have racked my brain over this for days and just cannot find an answer. Thnx Matt

player.position gives the position of the player 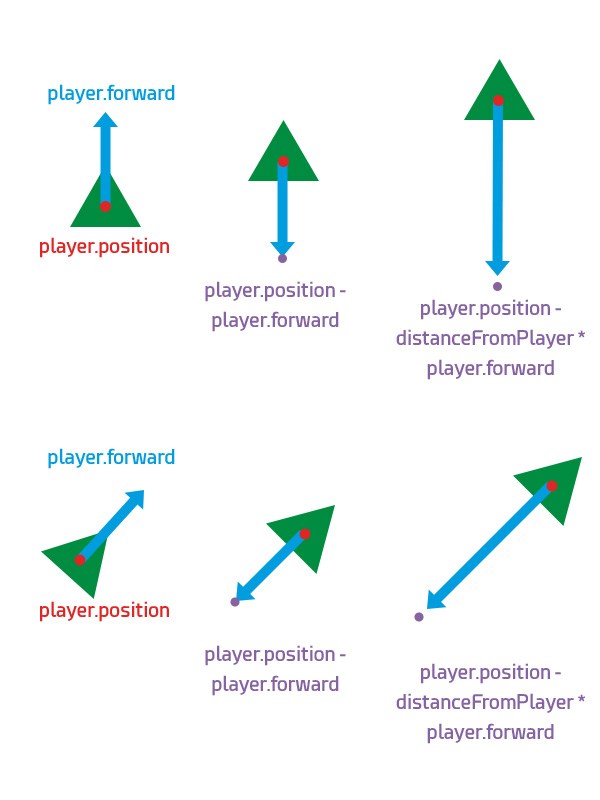 This site is temporarily in read only mode and not accepting new answers.

Not the answer you're looking for? Browse other questions tagged unity c# 3d mathematics rotation .

0
My camera does not rotate around player in 3d open world
0
Unity & CSharp - Placing Instantiated Object in the Direction of Player
0
How can I make object to follow first person character and the camera without making the object child?

0
Moving along a flat plane with accordance to camera view
9
Slerping rotation mirrors
0
How can I make my player move in the direction the camera faces?
0
How to rotate and move a model in the direction it is facing?
0
Why the player is never going forward even if the forward direction is selected?
1
Calculate heading required to turn ship so that its weapon can fire at target
0
My camera does not rotate around player in 3d open world
1
Calculating 3D character movement based on YAW and Pitch
0
Calculating unit wheeling