How to drag an object with mouse with collision?

I want to drag a GameObject with the mouse but I need collision. The basic mouse dragging code simply sets the position of the object to the hit.point with an offset from the difference at the start of the drag.

As for collision, I've tried using kinematic rigidbodies and setting the position with rigidbody.MovePosition(uh) but that allows the object to rotate while pushing it up against a corner on one side. With rotation constraints enabled, it flickers a lot and still intersects a lot. I also tried playing with collision detection and interpolation. None of the settings improved it.

I also tried Physics.ComputePenetration but that is extremely messy because some of the objects I'm dragging, have several colliders. The distance it calculates is per collider so it doesn't calculate the offset required to separate the entire object. I tried disabling all the colliders and then adding a single box collider sized to fit the bounds of the object. That had bad flickering problems.

The last thing I tried was box casts on each side that would find the closest point and offset the mesh in that direction. But if I moved the mouse too fast it would go inside the other mesh and would no longer register any colliders intersecting the box casts. It also suffered from flickering problems.

The image below shows the problem I'm having. The green dot shows approximately where the cursor was (also the hit.point from the raycast on the surface of the red cube). What I expect is that the couch should be offset so that it was close to the cursor but prioritizes not intersecting other meshes over sticking to the mouse. 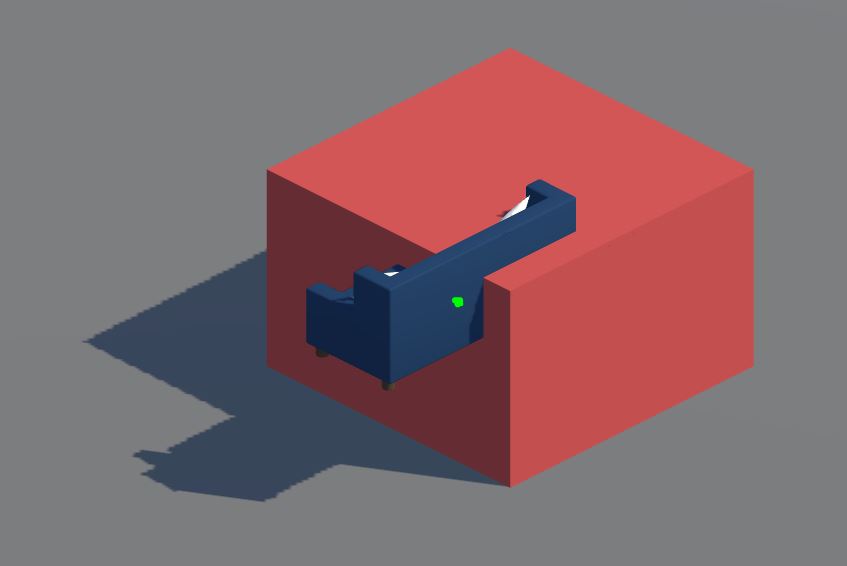 Browse other questions tagged unity collision-detection mouse or ask your own question.

8
How can I prevent rigid bodies from moving through each other using Unity's built-in physics?
1
Unity Problem with colliding instances of same object
2
object smooth orbital limit around another object depending on mouse drag
0
Objects do not stop when colliding each other while using mouse drag
0
Why the OnMouseEnter event never fire?
0
A trigger collider in Unity doesn't allow the player to pass through
0
Unity Mesh collider not working with capsule collider
0
Manipulating sprite shape rendered
1
Unity C# Scale 2d Object with Mouse Drag