I have a source image (arbitrary width and height c) shown here as a rectangle [X1,X2,X3,X4]. It contains two points C and D (both known coordinates within the image - X4 / top left).

Then I have a target image (might have different height a and width b than source image) that contains two points A and B (|AB| doesn't necessarily equal |CD|). There's also a source of projection S. 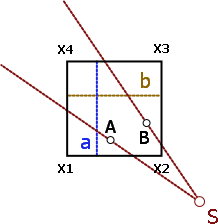 I need to somehow calculate coordinates of a transformed rectangle (polygon) such that: 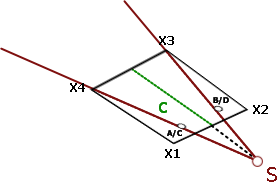 I thought I will solve it by:

3
How do you triangulate a 3D point from a pair of stereo images?
4
Convert point to its barymetric coordinates
1
Geometry problem for area of sight
3
Divide rectangular image into fixed number of random sized rectangles + 1 fixed size rectangle
2
Connecting two arbitrary points with 2 lines
1
Rotation of rectangles offsets render position
6
List cells in a 2D grid that belong in a sector / portion of a circle
0
Correctly map a Mount&Blade style aiming rectangle to the projectiles flying direction?