Sometimes can't use the rendered mesh as a collider in Unity?

But sometimes there is just nothing. No collider. Why?

I used this free asset: https://assetstore.unity.com/packages/3d/environments/fantasy/green-forest-22762 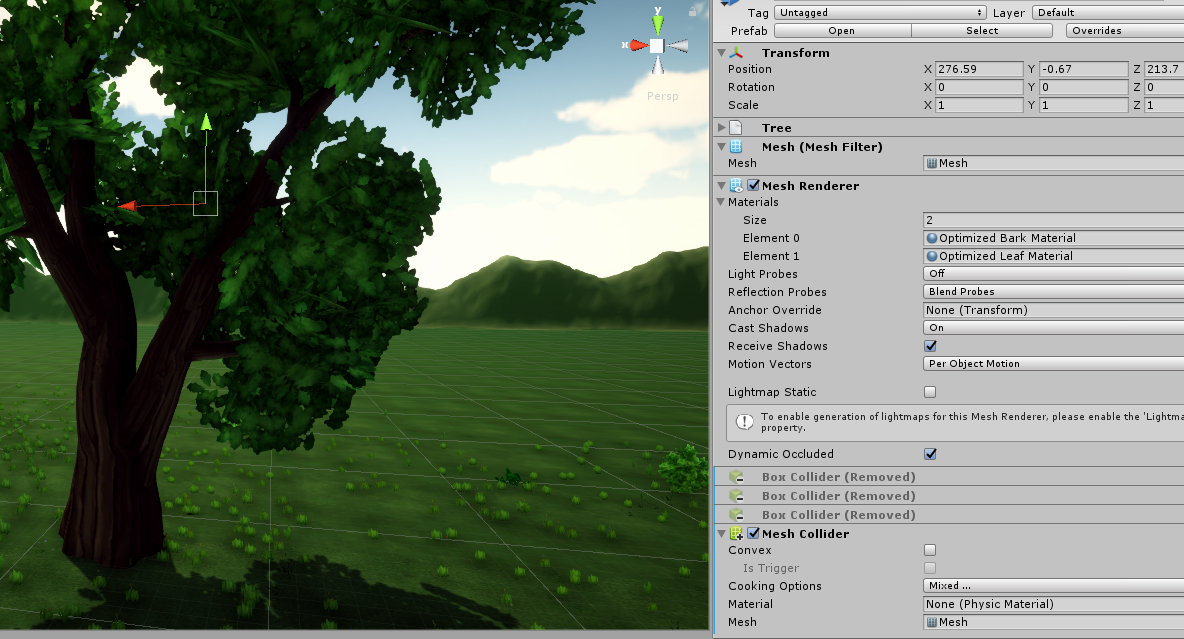 But when trees in your game don't move (as is the usual behavior of trees), you can mark your trees as "static" by marking the "Static" checkbox in the upper right corner of the inspector (unfortunately also not shown on the screenshot). They then no longer need a rigidbody themselves in order to block other rigidbodies and they can now have a non-convex mesh collider.

However, you should still consider to create simpler meshes for collision purposes. Having a large number of mesh colliders with a high number of polygons in the scene can be a real performance killer. And players rarely notice it when collision meshes are far less detailed than the meshes used for rendering. With trees it is in fact usually expected that the small branches and leaves aren't solid. Common practice for trees is to create colliders which only approximate the trunk and the largest branches.

Not the answer you're looking for? Browse other questions tagged unity 3d-meshes mesh meshcollider .

4
Matching collider to character mesh size in different postures
1
Unity mesh collider detecting collision on object empty inside
1
Why is my spherecast returning an incorrect hit on mesh collider?
1
Mesh made in Blender is correct in Unity3D as a rendered mesh, but "empty" as a collider?
4
Do I have to credit the author of a free asset from the asset store?
0
Raycast against a mesh without using a mesh collider?
0
How to get rid of gradient shading on the bottom of grass