I'm working on creating a gesture recognition system, and I saw one simple implementation that isn't as accurate, but is really easy to implement. The idea is that you have a unit circle with the 8 significant angles (0, 45, 90, 135, 180, etc) and you map those angles to a value of 1-8. So 45 would be 2, 180 would be 5, etc. Then you just use the Levenshtein distance algorithm to find the closest matching gesture.

I have a prototype that is "almost" working, but I'm having some trouble getting the math functions to play nicely with my algorithm. Right now, I have a list of points representing segments of a defined size that make up the gesture. I iterate over these points and get the theta value of the segment like so:

So if I have a drawing of a box like so: 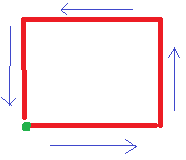 However, something seems to be off about the way I calculate my theta values, or the way I compare them, because for that drawing, I get "1753" indicating that it's flipping the theta values for the second and third lines (the vertical ones). Here is how I'm comparing the points:

So my theta values seem to be increasing clockwise, rather than counter-clockwise, so for the following angle:

Can anyone spot a flaw in my logic? This same math works in my game written in Java. Are Python's math functions different somehow?

You have two loop variables with the same name. This is probably playing havoc with your execution.

That I isn't declared anywhere. It isn't either of the two loop iterators.

Not the answer you're looking for? Browse other questions tagged python pygame trigonometry or ask your own question.

1
How do I determine if one value is within a certain range of another in Python
2
Finding vectors with two points
0
Possible to pass pygame data to memory map block?
0
Getting a color value from a coord
1
Pygame time.get_fps() value
0
Require maths help calculating deflection angles of quadrants
0
Possible Framerate Problem using Pygame?
0
How to panning camera on XZ axis with different angles
0
Python path finding