The animation looks unnatural because the stick rotates really fast because the curve is extremely steep.

So, I am sure the javelin is not always tangent to the path(of Centre of Gravity of the javelin).

So I thought maybe I need to calculate torque on the javelin. I've also tried this approach but the javelin is extremely shaky. My steps were:

I must have messed up somewhere because the integration is not working. Its extremely shaky and it works in some cases where launch angle is small, but fails when launch angle is huge.

So can anybody give me some pointers?

To align a javelin, you should properly compute all forces.

The reason that a javelin can orient itself into its path, is because of air drag.

Note that the drag is not always asymmetric enough to induce enough torque to align it:

Sometimes a javelin lands with point sticking in the grass, sometimes it lands flat on the ground.

If you drop a javelin from a tower, horizontally, then a drag force (magnitude scales with square of velocity) works along the whole length, the gravity is off-centre, causing it to nose-down. 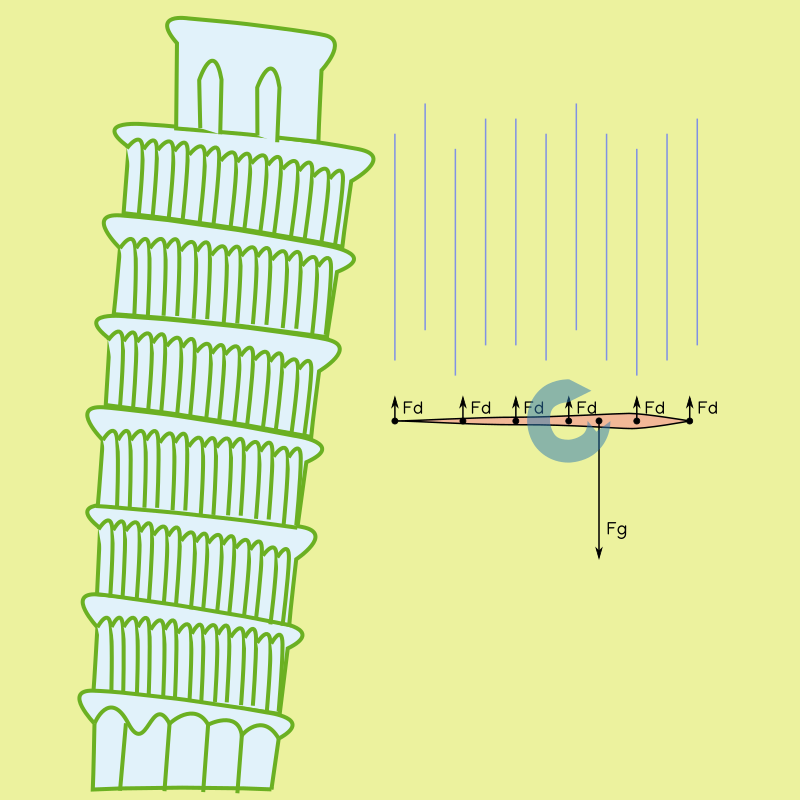 Have you ever thrown a javelin straight up? It does actually rotate quickly on top, because the pointy end is heavier. But it does so not when it reaches the top but after the velocity changes to move downward. It's built that way to ensure the pointy end hits the target ...

You can try to model torque but that gets ugly with different weights, lengths, and heads/tails compositions. A full model might produce the most accurate results, but if the goal is to have a projectile that lands pointy-end-first no matter the launch angle, then your original method is what I'd use, but maybe augmented with a small time delay.

E.g. delay the change in orientation a small amount so that it starts to travel downward before fully rotating, much like a real spear or arrow. You can have a decaying delay for best results.

If o(t) is the tangential angle you were using for the projectile at time t, then have it instead be o(t-a). Where a is minimum of t or some maximum A.

maybe you should position the javelin in such a way, that the 'nose' of the javelin is where the curve is, not in the middle, that way it might look a little 'more natural'.

you can add a turning delta that javelin can turn only by certain degrees that are given to it, that way it goes maybe a little bit out of sync but it will look better ;-)

Not the answer you're looking for? Browse other questions tagged projectile-physics motion torque or ask your own question.

13
Projectile Motion - Arrow
7
How do I determine a good path for 2D artillery projectiles?
1
Psudo 3D(2.5D?) Projectile motion
3
How to create a projectile motion of a cannonball in top down view?
0
OnTriggerEnter works…sometimes