How can I convert Physics2D.Raycast to Physics2D.BoxCast to yield the same results?

This question has been updated to better reflect my current issue, and some of the progress made while solving it.

I've been working on a 2D character controller that uses raycasting to detect collisions with objects. Since Physics2D.Raycast and Physics2D.BoxCast both return a RaycastHit2D object, I was hoping to convert my raycast detection to boxcast detection, but I've been having trouble understanding how to do it. Unity's scripting API is a little vague on how BoxCast actually works; specifically, I don't understand the difference in use between the size and distance parameters.

I thought adapting this to work with boxcasts would be easy; after all, Physics2D.BoxCast has many of the same parameters. I ran into some issues, though, but here's my code:

One of the issues with this is simply how my character "feels" when using this method vs my raycast method. The movement doesn't feel quite as tight. Similarly, I have to use the arbitrary value of .02f as the box's size.y in order to make my character be flat on the ground. I've tried other values like skinWidth, or something like .03f, but these put my collider slightly in the ground or above it. I had initially used raycastLength as both the box's size.y and the distance parameter of the boxcast method, but this was inconsistent, and I think it produced "too much" of a box when casting (I was frequently colliding when my character was still airborne).

I also don't understand why I don't have to take away skinWidth in the line deltaMovement.y = hit.distance * velocityDir. I had been subtracting it, but this was producing a lot of bouncing; the movement wasn't right at all.

Ultimately, this related question helps explain why I want to use boxcasting. Instead of using many rays, each of which has a gap between it and the next ray, I'd like to use a boxcast to simulate a solid "sheet" of rays that can determine my collisions. Imagine a scenario in which the character is on the peak of a mountain; raycasts (with the aforementioned gaps) might miss this sharp point, but a boxcast will hit it, and that hit point will determine the character's movement.

Here's a little visualization I made about the two approaches: https://imgur.com/a/1di12By Am I thinking about this correctly? Should I be using Physics2D.OverlapBox instead?

I would very highly recommend that you visualise (using Debug.Draw... methods) your collision hit points/contacts and normals to better understand what's going on - actually, I'd say output all the info that RaycastHit2D gives you after a BoxCast2D. The main catch with BoxCast2D is that the hit point won't necessarily be "on the edge" of your collider (as it's the case with Raycast2D) - it can very likely be inside of your collider. Here's an image of how your BoxCast2D might behave: 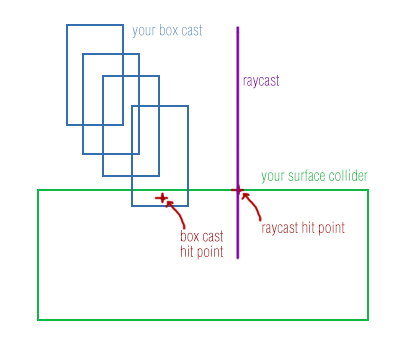 If what you're trying to achieve is a precise "push out of collision" behaviour, you'll need to use BoxCast2D in tandem with Physics2D.Distance.

1) You BoxCast2D in the direction of movement.

2) Move your BoxCollider2D to the position where BoxCast2D collision happened (hit.centroid is where the box of a BoxCast2D was positioned when the hit happened).

3) Use Physics2D.Distance to find out how much you should push out your BoxCollider2D out of collision.

I think it's useful to visualize the physics 'Cast' operations as an object being thrown in a straight line and stopping when it hits another object (collider).

Size is the size of the box being "thrown".

Distance is how long that box is "thrown" in said direction.

When dealing with game physics an approach generally taken is to update positions, then calculate collisions and correct overlaps. This is done because it's very robust and easy. Trying to prevent overlaps before they happen (which it seems like you are trying to) is much harder and more prone to errors.

Translating that to your example that would mean:

Your code would be the part slotted into nr 4 in that list.

Here's what I'd suggest:

You'll need a CollideHorizontally as well, which needs to execute before the vertical one to ensure that you can't climb up walls. But that should be identical to the vertical one, only with reversed X and Y.

As for the input movement (step 1), that will vary wildly from game to game, so that's entirely up to you.

Unity has collision detection and collison resolution built in. If you want to know what collider your character is standing on, use OnCollisionEnter. No need to reinvent the wheel using raycasts.

If you want to know about colliders nearby, i.e. colliders a fixed distance away from your character but not yet touching it, use a trigger volume and OnTriggerEnter.

However, if for some reason you really need to know about colliders a dynamic distance away from your character, e.g. for predicting future collisions, a box cast comes in handy. Note the difference between Physics.BoxCast and Physics.OverlapBox though, a box cast moves the box along a line.

So after trying some more things today, I've got this working about as well as I think I can. Here's the boxcast method:

The relatively simple changes that I made were to:

With that being said, this method still doesn't produce a completely accurate collision when compared to the raycast method. For example, my position is still off by .005f using a boxcast, and my character is still ever so slightly landing off the floor (you have to zoom is quite far in the scene view to see this, but there is no visible gap using raycasts). While this is still very accurate, I'm wondering if this discrepancy would cause collision issues once more (complex) functionality is added to the controller.

@Karl Ramstedt presented an alternative in which collisions are resolved after moving the character, and this might be a better/more reliable approach. I would still appreciate some feedback if anybody has anything else to contribute.

Not the answer you're looking for? Browse other questions tagged unity c# collision-detection raycasting or ask your own question.

5
Is Physics2D.BoxCast a safe alternative to a row of raycasting?

0
How do I convert a vector into a distance?
0
Raycast will not hit generated box colliders at initialization
3
Why does Physics2D.Raycast automatically fail if applying a layer mask?
13
How to solve the ground check problem?
1
How to completely stop the camera from clipping into the ground
3
Why does my collider rotate correctly on a slope only when a ray is cast directly from its center?
0
In 2D, how can I improve character rotation using raycasts when dealing with sharp/convex edges?
0
Why aren't the Physics2D.Raycasts reliably colliding with the 2D Box Collider walls?
1
When setting Rigidbody.isKinematic true collider won't work anymore