Animate some tiles of tile map

I have a game where each "tile" of the terrain is a triangle (Settlers 2). Those are placed next to each other and in way creating an infinite world (right/bottom jumps back to left/top). There is a 3D component (each triangle point has a height) but that gets translated into an Y-position offset, so everything can be considered 2D.

Everything (texture coords, screen coords, color (white<->black, FoW)) is put into VBOs already and usually does not change (FoW may disappear which updates the color VBO, but rarely)

When drawing I iterate over the visible tiles (currently in view) and collect "runs" of tiles with the same texture. After that I do:

To reduce the number of texture switches I wanted to create a texture atlas. But the problem: Some textures are animated (texture animation so all tiles use the same frame of the animation at any given time) and those animations may be different.

To give some numbers:

How would I best go with those animations?

Visualization of 3 textures: Triangles cut out from squares in any position (in fact only 6 are possible: Top to bottom, top to middle, top to middle rotated by 135° and their mirrored counterparts). Shown is 1 of 2 triangles per square, the other one is mirrored horizontally. All tiles may have different sizes 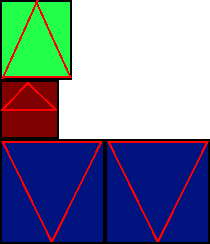 I'd recommend doing this in your shader.

Not the answer you're looking for? Browse other questions tagged opengl animation texture-atlas or ask your own question.

2
OpenGL ES 2.0: Picking Individual Polygon Sprites from within VBO
8
How is animation handled in non-immediate OpenGL?
35
Drawing lots of tiles with OpenGL, the modern way
4
Need to produce an animated texture of Water where each image tiles in all directions
1
When to call GLBindTexture when using a spite-sheet?
1
OpenGL 3.3 tilemap rendering techniques?
0
How do animation works with mesh?
0
Unity 2D sprite animation keep in sync after setting inactive
3
OpenGL large tile map rendering
0
Using ID3D11DeviceContext::Map to update a dynamic texture results in offset or incomplete data