OpenGL draw functions and multi-threading. How they work together?

I want to apply multi-thread in a simple way to control and draw 4000 objects. I am using SDL and OpenGL. 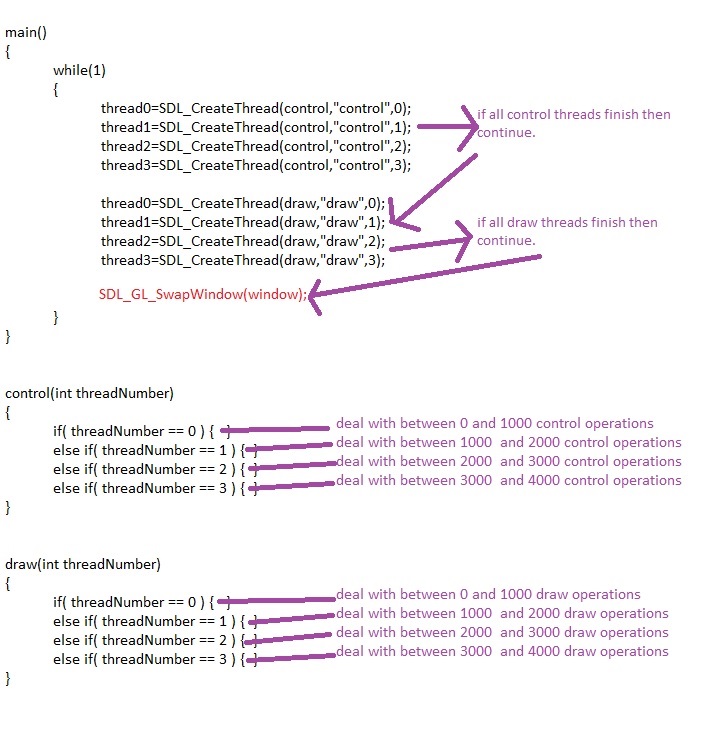 do you think it works ?

It is definitely possible and useful to make your rendering multithreaded, but it wouldn't work the way you've proposed. Keep in mind that with OpenGL, you're drawing all the objects for a frame into the same context. If you have 2 threads changing state in the same context at the same time, things are going to get very confused. So you have to be very careful with your threads.

Another way to architect this would be to have 3 threads and 3 contexts in the same share group. It would work something like this:

And so on. So thread 1 calculates all objects positions at time t = 1. Threads 2 and 3 are initially idle.

At time t = 2, thread 1 draws all 4,000 objects into a texture-backed FBO in context A. Meanwhile, thread 2 starts calculating the objects positions at time t = 2. Thread 3 is still idle.

At time t = 3, thread one starts calculating the positions of the objects at time t = 3. Thread two meanwhile is drawing the objects at their positions from t = 2 into a different texture-backed FBO in context B. Now thread 3 kicks in and simply blits the frame 1 texture to the screen.

As you probably figured, at time t = 4, thread 1 draws the objects from their positions at t = 3. Thread 2 calculates the objects positions for t = 4. Thread 3 blits the frame 2 texture to screen.

This way, any given context is only drawn to on a single thread. Threads alternate whether they are calculating object positions or drawing objects. One thread is dedicated to just drawing the frames to the screen.

Note that you will need some sort of synchronization primitive to ensure that things happen in order and not before parts are ready. Something like a semaphore would probably work well. So thread 2 would wait on a semaphore before starting to calculate frame 2's positions. When thread 1 finished calculating frame 1's objects' positions, it would signal the semaphore so thread 2 could start the calculations for frame 2. You could do the same thing for drawing and blitting.

Not the answer you're looking for? Browse other questions tagged opengl sdl multithreading or ask your own question.

1
GLES2.0 3D Android game performance and multi threading the update?
8
How to draw 2D images using OpenGL, in SDL?
0
Drawing Colored Geometry in OpenGL using SDL
1
Second glBindBuffer() call crashes program on Draw call
0
How can I benefit when I don't use gpu?