So I have successfully built a script that can determine the physics for a ball reflecting linearly off of walls, similar to pong, while the ball is using a kinematic rigidbody. The issue is when the ball hits the wall and the OnCollisionEnter2D is called, the ball has had it's position adjusted based on it's velocity such that it is phased inside the wall a tiny amount. My understanding is that this is necessary in order for the engine to recognize the collision. The ball seemingly reflects like normal, but in the uncommon event that the reflected angle allows the ball to travel while still having it's collider phased inside the wall, and the ball impacts a different surface of the wall, this 2nd impact will not result in the OnCollisionEnter2D call and the reflecting result, since technically the collider never left the wall in this time. This causes the ball to fly past the wall and off-screen.

I've tried many solutions to fix this, mainly making it so that before the bounce occurs but in the collision event, I would move the ball back to the precise location where the edge of the ball hit the edge of the wall. This would mean that the collider of the ball is in-bounds at all times and therefore no odd behavior as a result of overlapping would occur. I've yet to find a good method to do this, and I'm wondering if there is one that could be suggested to me or if there's a different solution entirely (which doesn't involve changing the ball's rigidbody from kinematic).

Below is the appropriate parts of the script I have written currently, as well as an image of what the game view looks like for visualization. 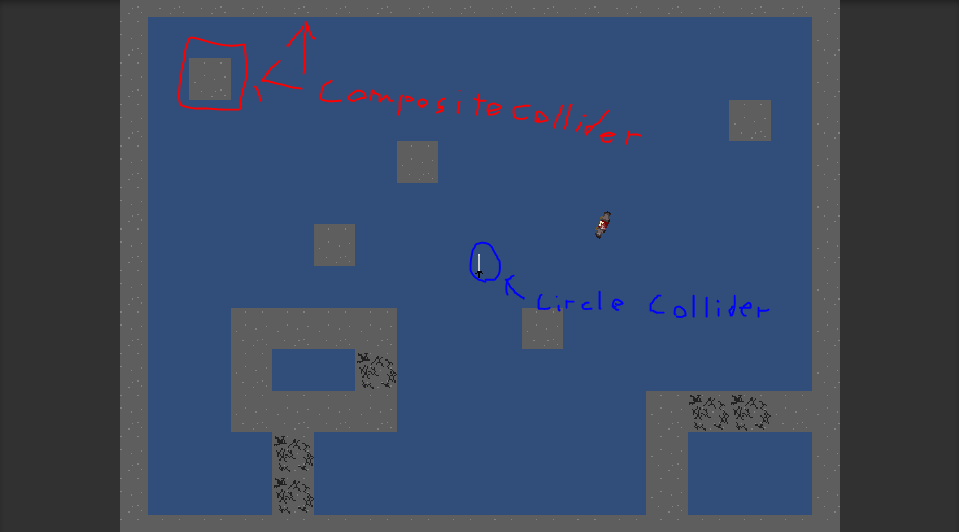 More Details: The sword in this image is what acts like the ball. My speed variable is set from a separate script. Everything is on the default layer. The Rigidbody for the ball it is kinematic, and for the walls it is static. Trajectory is a Vector2 that corresponds with the angular direction of the ball.

Are you sure, that the OnCollisionEnter2D is not triggered? Use a print() statement or a breakpoint to make sure it is not called. I think it is BTW but you using only the first element of the collision.contacts array for your calculations. Find a way to access the second or the requried element, to get the right normals to your Reflect function.

If I am wrong, then:

You can try using triggers(just tick the isTrigger on the colliders). Then you would use OnTriggerEnter2D and maybe OnTriggerStay2D in code to check for "collisions" and stuff. Find a way to get your contact points, then. See the link for a few suggestions.

Please let me know if this way it triggers the OnTriggerEnter call!

If that does not work, and you want to go with collisions, than you can find out how much is the ball in the wall (for example raycast from the ball) and push it back by that value (in OnTriggerEnter or Stay).

You can also just simply push it back by a value of your will(1/4 of the diameter of the ball for example) when in collision. You might have to adjust the graphics of the ball to hide this hack.

You shold try and play around with all of the above, and decide which one is for your setup.

5
How can I set up a Pong-style game using the physics system in Unity?
1
Objects stick together on Collision
0
Unity3d Rigidbodies overlap even at low speeds
3
How to completely stop the camera from clipping into the ground
1
OnCollisionEnter2D just flat out not running for certain objects
0
Improving Rigidbody collision between real-time movable object and other Rigidbodies
1
OnCollisionEnter2D not working
0
How to detect which car T-boned the other in a collision?
0
How to knock animated character backward when sword strikes wall