Player object's model starts to shake after some time

I created a default scene in a new project and imported a model from Unity's asset store and then get this strange behavior of the model starting to shake for no reason after some time after starting the game.

I'm really confused and have no idea where to look for a problem and google doesn't seem to have a solution to this either.

OK, I figured it out. I noticed the Y coordinate for the object was dropping when in game. I forgot to switch off "Use Gravity".

I'm creating a space-shooter game and didn't have any points of reference to see that my player object was falling. And once the Y coordinate reaches values below -10000 units the precision drops (not enough digits for the fraction) so the translation now cannot be shown smoothly and instead looks like the model is "shaking". 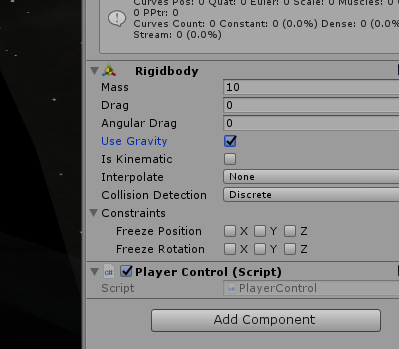 Not the answer you're looking for? Browse other questions tagged unity rendering models 3d-modeling or ask your own question.

4
How to start in animating my model?
2
Using different shaders on the same model at runtime
0
Adding Animation to Object—Unexpected Behavior
1
Stopping player from spamming movement keys which causes glitches Unity C#
2
implementing magnet like system in unity
0
WebGL Freeze for some minutes after loading asset bundle
0
Unity Custom InputManger for Cross-Platform Input