I have an issue with double jump for the player my code is working but I want the second double jump animation finish(idle Animation: anim.SetBool("Jump", false)] before he touches the ground can anyone help me on that here is my code :

I have changed the code from that :

I have changed it because FixedUpdate, we use it only for physics because it's not called every frame, unlike update function.

the problem is that the double jump doesn't work in this case can you explain me why?

So I looked into your project and here's what the issue is:

This snippet is being called every tick which means, it continuously checks whether the player is near the ground and when it is, it sets the Jump bool as false which then transistions from jump animation to idle.

Why it works for single jump?

How to fix it?

One way to fix it is by simply waiting for a few seconds when jumping and then as soon as the jump animation finishes, change the boolean so the transition happens from jump to idle. You can use Coroutines to achieve that.

Second way of fixing it is by removing the ongoing transition to jump like this: 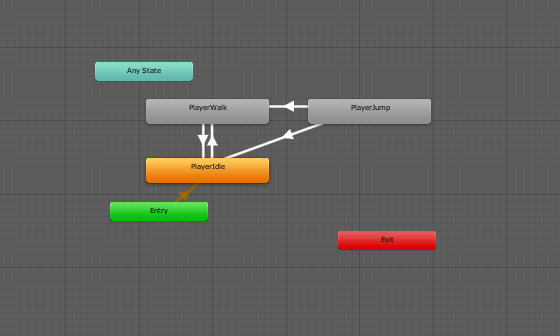 and after that use Animator.Play(String StateName) just when the player jumps (Jump key is pressed). I Usually use the 2nd one but both should work.

I tried to get an answer by myself, tell me if I'm wrong or not.

In the second case When we have moving the playerjump() method to fixedUpdate, in this case, the two methods checkifgrounded() and playerJump() are executed at the same time so there is no offset the isgrounded value is false as soon as we press space, so the player jump only once.

2
Jumping higher when the player touches a trigger collider in Unity
0
translation and rotating at the same time and waiting before animation?
0
Why doesn't my jump script stop my player from jumping mid air?
1
How to completely stop the camera from clipping into the ground
0
The player can jump forever without approaching the ground
0
Why the player clings to the ground and cannot jump?
0
Why when playing mixamo animation on my player the player ending and also while playing the animation inside the ground(terrain)?