Is there any way to keep the applied torques in the old planes, even if the ship's local plane has rotated?

I'm trying to make a space shooter game in Unity3D with realistic spaceship physics. I have a problem with correct rotations. When I apply torque in global coords system it will always apply them in the same global planes, even when the ship is eg. rolled to a side - if I now yaw, it will rotate it in the global system instead of yawing the ship in its local coords.

Now, when I use relative torque, I can apply yaw, then roll and it's screwed again because now the torque applied for yaw works in rotated (rolled) plane instead of the old plane.

Is there any way to keep the applied torques in the old planes, even if the ship's local plane has rotated?

I start off with the ship aligned with the world axes. I apply relative torque to yaw. 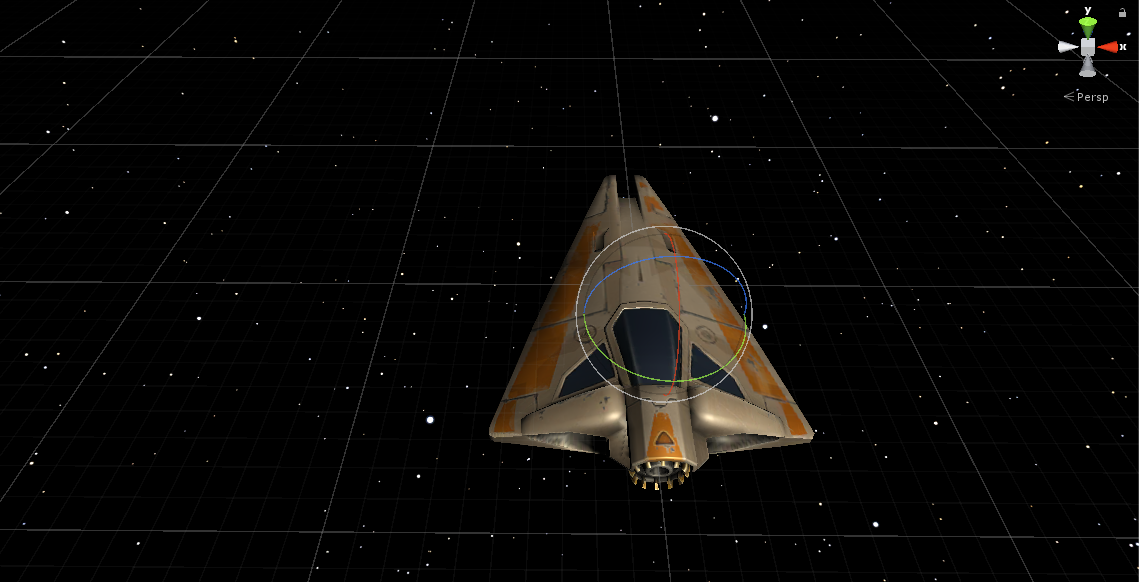 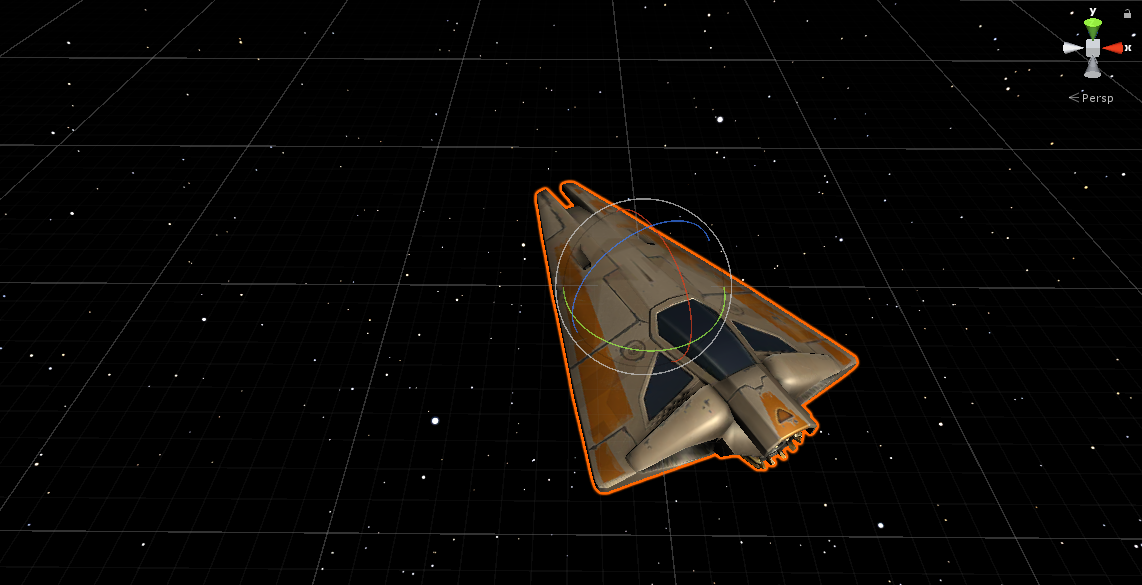 I apply roll. The yaw is supposed to continue rotating the ship in the old plane same as world horizontal plane. 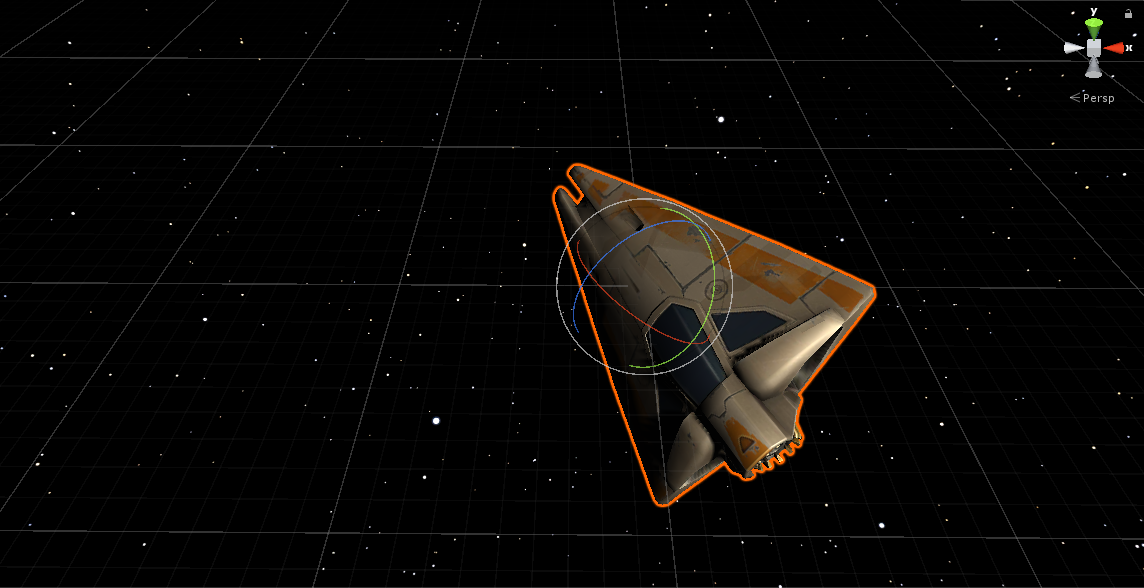 But it does not. Instead, the old yaw torque now continues in the new plane which is the local X-Z plane! 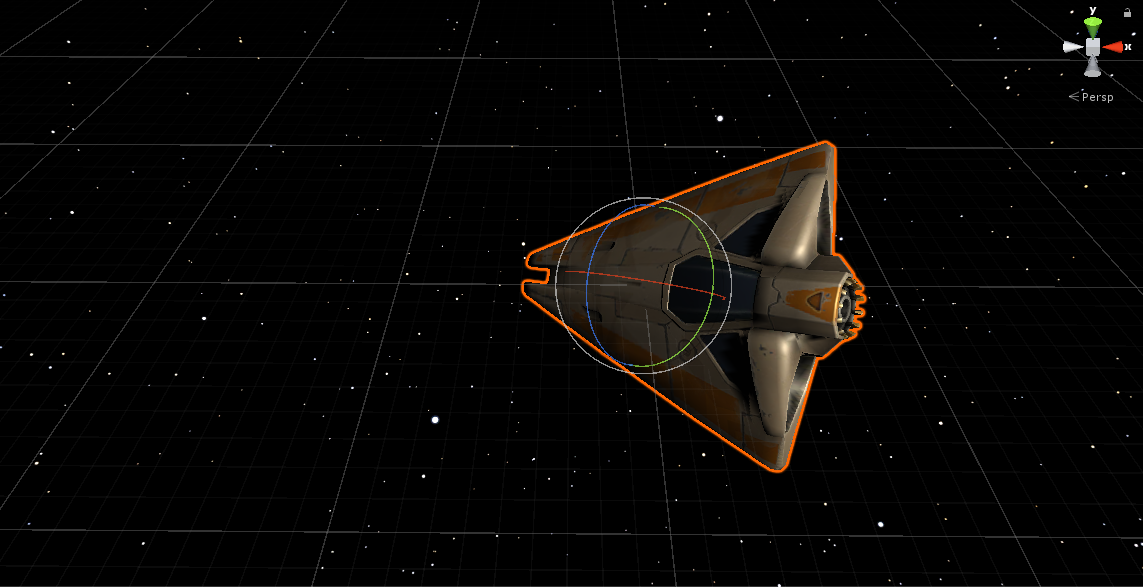 Here is the code I'm using to control the spaceship currently, using the relative torque strategy:

Here's a "stop-motion" explanation. The first set of frames shows how I expect the rotations to happen and the second one shows how it actually takes place in Unity.

First, your interpretation of what's happening in Unity is not accurate.

When you apply your roll torque, the axis of the continuing yaw drift does not shift to match the object's new local XZ plane, as we can see in this series of captures:

As we proceed from left to right, we see:

And it turns out this is exactly what we expect from real physics.

Although working with Euler/Tait-Bryan angles or yaw/pitch/roll terminology can get us used to the idea that rotation is separable into 3 independent components - so we might expect an object to "remember" its yaw speed and its roll speed in separate variables - in reality 3D rotation does not work that way.

An object in an inertial state (like a spaceship in a vacuum away from gravity wells and not currently firing its thrusters) has just one angular momentum vector - just one axis of rotation - and every torque we apply to it speeds/slows or moves that axis.

This change in the axis of rotation in response to torque is what's called precession. You may be used to it being a small/negligible effect for things like wheels, where the speed/torque spinning them up is much greater than the orthogonal torque deflecting them, and things like friction dampen the resulting movement. But in space with nothing to damp the motion, and with yaw thrusters exactly as strong as the roll thrusters, the combined effect is quite pronounced.

So, if your goal is realistic spaceship movement, I have good news for you: that's exactly what you're getting from this physics simulation!

But if this feels counter-intuitive as a control scheme for your game, then you'll need to come up with an alternative model. For instance, you could apply yaw and pitch using torques on the rigidbody, but apply roll using your own update script that just rotates a transform inside the body, without impacting its physics.

There are two methods to add torque to a rigidbody:

You seem to want to rotate the object in the world coordinate system, so you should use AddTorque, not AddRelativeTorque.

By the way: The same applies to AddForce and AddRelativeForce.

Not the answer you're looking for? Browse other questions tagged unity c# physics rotation or ask your own question.

1
How to calculate the torque required to rotate rigid body about constant axis and rotating axis?

13
How is the gimbal locked problem solved using accumulative matrix transformations
4
Rotations and angular velocity
0
Problems implementing a 3rd person static camera in Unity3d
5
calculating torque from angular momentum considering inertia moment
1
Transform.forward having problems after rotation
0
Strange Rotation in LWJGL
56
I'm rotating an object on two axes, so why does it keep twisting around the third axis?