Difference between "buffer" and "array" in OpenGL?

When I read doc on webGL or OpenGL there can be seen some patterns in how names of functions and objects are used. But I can't understand the difference between buffer object and an array.

There are "vertex buffer objects", "vertex array objects" and even some kind of "buffer array" or "arraybuffer".

In OpenGL context, When something is "array" and when it should be called a "buffer" instead?

The naming of Vertex Array Object is somewhat unfortunate. There's three different things that appear (used to appear) in/with/around your application, and which are (have been, historically) named differently, with "array" or "buffer" in the name (well, there's framebuffer objects too, but I'll ignore that).

A Vertex Array Object (VAO) is an object which contains one or more Vertex Buffer Objects and is designed to store the information for a complete rendered object.

Each buffer tends to constitute one attribute of a vertex array (object). A VAO can contain many vertex attributes (e.g. position, color, UV). Each might be held in its own buffer, where buffer indicates an unformatted series of contiguous bytes, and where you need to explicitly specify the size (type) per buffer element for both CPU side OpenGL calls and GPU-side shader work.

That's one way. The other ways this can work are:

The below diagram illustrates these latter two cases. 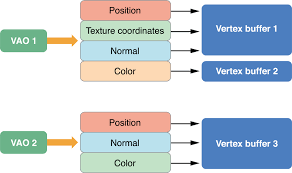 Bottom line: If the phrase "vertex array" is used unqualified in OpenGL, you can assume it means VAO, which, in an OpenGL context (specifically) is a very different thing indeed from a buffer.

EDIT re your comment: GL_ARRAY_BUFFER indicates an intention to use that buffer object for vertex attribute data, as described above. This is because buffers are not used only for vertex attributes. However, as it is the most common use-case and you are asking about VAOs, I won't go into the others; here however is a list of the other types of buffers that can be set up.

This terminology is rooted in the history of OpenGL. What's important to remember is that, for most of the GL versions which are relevant here, OpenGL was evolved incrementally and by adding new functionality to an already existing API rather than changing the API.

The first version of OpenGL had none of these object types. Drawing was achieved by issuing multiple glBegin/glEnd calls, and one problem with this model was that it was very inefficient, in terms of function call overhead.

OpenGL 1.1 took the first steps to address this by introducing vertex arrays. Instead of directly specifying vertex data you could now source it from C/C++ arrays - hence the name. So a vertex array is just that - an array of vertices and the GL state required to specify them.

The next major evolution came with GL 1.5 and allowed storing vertex array data in GPU memory rather than in system ("client-side") memory. A weakness of the GL 1.1 vertex array specification was that the full set of vertex data had to be transferred to the GPU each time you wanted to use it; if it was already on the GPU then this transfer could be avoided and potential performance gains achieved.

So a new type of GL object was created to allow storing of this data on the GPU. Just like a texture object is used for storing texture data, a vertex buffer object stores vertex data. This is actually just a special case of a more general buffer object type which may store non-specific data.

This brings us almost to the end of our story. The resulting API was quite verbose when it came to specifying vertex array state, so another avenue of optimization was to create a new object type that collected all of this state together, allowed multiple vertex array state changes in a single API call, and allowed GPUs to potentially perform optimizations due to being able to know what state was going to be used ahead of time.

Enter the vertex array object, which collects all of this together.

So, to summarise, a vertex array started life as a collection of state and data (stored in an array) for drawing with. A vertex buffer replaces the in-memory array storage with a GL object type, leaving the vertex array just being state. A vertex array object is just a container object for this state, allowing it to be changed more easily and with fewer API calls.

I havent worked with OpenGL in a while, so I might only be half-right. Generally speaking: Buffers store an array of unformatted memory. An array is a general term of contiguous memory.

A buffer needs to be bound to the context, whereas an array is just an array of data. If i recall correctly, the data in the buffer is meant to be copied onto the graphics card (hence the binding).

Hope this helps a bit

Not the answer you're looking for? Browse other questions tagged opengl webgl .