What makes a good tech tree?

Some games seem to follow the abc approach of item 1 -> item 2 -> item 3 with minor stat changes while others make every unlocked option wildly change the way a game is played by throwing new units into the game which are able to change the balance of the game. Some make unlocking one branch block off another for the rest of the game while other will let you research everything. Some let you research multiple things while others will penalize you for switching research before it is complete. On that note tech trees can be progressive (with dedicated research over time unlocking an item) while some need you to collect enough money/points in order to unlock instantly.

What are some general guidelines for when to employ what strategy in a game? What games types of games would benefit more from one tech tree type over another and why? When should a linear tech tree be employed over a branching one?

For example a game where the main character has to build up an organisation and research technologies in secret while others are finding them and shut them down resulting in lost research laboratories, which reduce research output. The research output should increase somewhat exponentially as the game goes on as better technology is unlocked and research laboratories are upgraded. There would presumably be a very large tech tree to explore and the constant danger of losing facilities to other parties until you either unlock some endgame tech or lose everything.

Why this isn't a duplicate

Some people are marking this question as a duplicate because there is a related question about tech tree size. This question has to do more with the connections, cost and relationships between the technology options (of which size is a factor but not everything).

Sid Meier has said that "games are a series of interesting decisions". This definitely applies to tech trees. In a typical strategy game, at any moment the player is faced with a decision among very different choices: economy (train workers), military (train soldiers), or tech. Tech is often the most interesting because of the uncertain and distant payoff; by spending resources on tech research, you are spending something that could have been used for the cumulative payoff of economy (extra income for the rest of the game), or the immediate security of military.

A decision is interesting when there's a limited number of unique-yet-viable choices. Too few or too alike and the choice becomes uninteresting. Too many and the player falls into decision paralysis. If some choices are obviously superior than others, they are uninteresting to veterans but will trap and frustrate newbies.

Another factor to consider is that hardcore players and genres can tolerate more choices. Turn-based, 4X games are notorious for the bewildering amount of choices. Contrast this to choices in faster-paced games like ARPGs.

There's an excellent analysis of tech trees in RTS games here, which uses the term core choice for such choices. Likewise you want to avoid newbie traps, choices which are hazardous for newbies because they lead to strategies that are difficult to play.

Let's look at the classic Starcraft Terran build tree (which is also a form of tech tree). Terrans have three military production buildings:

Why didn't they flatten that tree, and allow the player to build a Starport off-the-bat? Apart from artificially delaying the appearance of air units (which are tougher to counter), it's difficult to use air units. For their cost, they tend to be weak, but are great at specialised roles like exploration and harassment. They are a poor choice for attacking strong points, or defending an attack. This makes them a newbie trap; while a veteran player will know when to use air units, if a newbie went straight for air units, they can easily lose them in a fight against more cost-efficient ground units. This comes at a cost to veteran players, who could enjoy more variety if they could play air units from the early game.

This tech tree is also a way of opening up more choices as the game progresses through stages. In the early game, you want fewer choices and a more predictable match-up. The mid-game contains more interesting choices but few decisive ones, as you want players to recover from poor choices and enter the late-game, where the truly devastating, game-ending strategies are made. 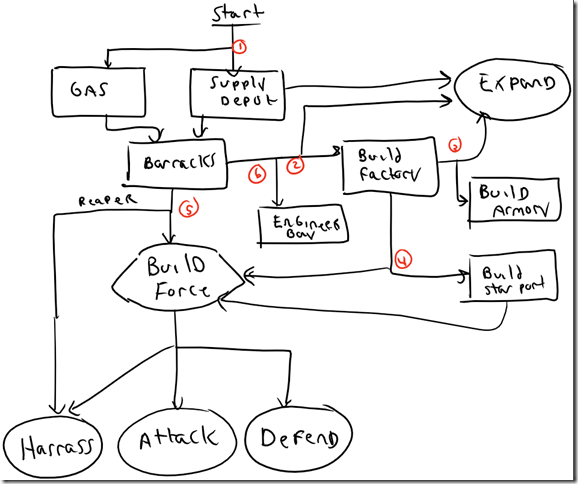 So I encourage you to look at your strategy game as a graph of choices, among the stages of the game. Your tech tree will fit somewhere into this graph.

Following Sid Meyer's "important decisions" again, some tech trees suck. And it's those with either low-impact research or with the result being flat stat boosts or so. (as well as highly granular trees most of the times) The decisions feel weightless and are therefore boring.

Excluding trees on the other hand are nice, because not only do you choose a reward, but you also forfeit ever researching that other thing. (This however comes at the cost of being harder to balance or leaving only few actually viable paths)

Leaving few viable parts is another hot topic. If your tree is huge and meaningful, but if "not choosing A,B,F,T as the first 4 research blocks" means you loose the game, the tree is really really bad (this is more balance than tree design tho)

Also important is the research being tied to the lore/world. Making something researcheable which according to the world is already common knowledge (or should be) just for the sake of having more options usually breaks the immersion. This also goes for illogical research dependencies. [It does depend on your game how relevant this point is though]

Another thing is: most good research trees I encountered were important. Not in that the decisions were meaningful, but that the research itself was part of the core gameplay, and for example while "not going for research at all" was a viable strategy in Supreme Commander (I or II don't remember), it was only as an all-in rush strategy, which meant that you were actively not engaging with research (which is another way of engaging with it imo). On the contrary, the most annoying tech trees were the ones that just felt tacked on later. If most research rewards could also be given in another way (items, level-ups, milestones etc.) or feel like they should have been in the game to begin with, consider not having one, or stripping it down.

Most of these things don't really comply to the example you gave, but I fell they still matter to most other people

In addition to the other answers, i wanted to talk about the relevance of the 'match time' on the choice of tech tree and the option of 'stopping progress' in a tech tree.

As congusbongus said, even a build order can represent a sort of tech tree. This has special attributes, as you can 'delete' progress, but also 'save' it. Building A needs Building B first, if B s destroyed, you wont be able to build A anymore. To circumvent this, it is possible to build severals Building Bs, so if one gets destroyed you still got the option for Building A.

This would be roughly equivalent to your example of a opposing player 'shutting down' a research center. If you got another building with the same research, nothing is lost. If the opposing player doesnt know that, he might feel save and wont persuit more actions in this way.

So, depending on what kind of game your playing, you might want to have research that is stored somewhere with the possible option of redundancy. This would cost extra resouces but if you go for the late game anyway, this could be a good strategy. This would be most likely in some sort of action based RTS with shorter tech tress, as losing core and maybe even global technologies would cause a big problem for game design. Imagine a Civ game, where everyone is in the industrial age with first tanks and cars, and suddenly some race losses the knowledge of the wheel, cause the building which hosts "THE WHEEL", the prototype of the wheel of this gets destroyed. But loosing the radar dish so you can't build planes anymore makes sense (sort of).

the other factor sit, that RTS dont force you to advance, as any kind of research is connected to some sort of cost, while in this cases the cost of 'time' is constant. Back to the Starcraft example, you can decide when to build the next building to advance the build order, when to research the weapon upgrade etc. Everytime you do that, its an active decision, and while it not always seems awesome to have that sort of choice, you activly decided to to that. But you have to option to spend your resources on something else, like more troops. In Command & Conquere Generals you collected Experience, to let you progress into a tech tree. You decided what to pick with your points and when to pick them. Maybe you saved your points to pick a tank upgrade to defend against stealth, but then your enemy focused on defense, so upon realising this, you could pick the stealth bomber instead.

In games with a longer time frame (mostly turn based) like 4X games, they hint you to research something, cause your last research completed. Some games wont even go on until you choose another research. Most of these games only allow to research one thing at a time, cause research is a type of game progression, not just power progression. In Civ, researching archery over science means, you will be behind in research for the rest of the game if not for some lucky incident or natural bias (race with better science gain or better starting position). In these games researching doesnt cost anything, but the 'production' of knowlegde costs resources. While your people produce a static amount of science, you can build schools, universities etc. whiche cost money. In these cases, having a tech tree means to have maintenance costs. Something you wouldnt have in most RTS.

Not the answer you're looking for? Browse other questions tagged game-design balance .

23
How do you decide on the size of a tech tree?

12
What makes a game a game vs something else like a puzzle or a toy?
7
Balancing upgraded units vs. non-upgraded ones
1
Application of Game trees in AI
40
How can the lategame in a 4X game be made more exciting?
2
What elements are indispensable to players of a tactical strategy game?
3
Is there any specific reasons to include clearly inferior options in a game?
6
How should the player unlock things?
0
What category would this asynchronous production economy game fall under?
5
How can I make a more engaging research/progression system?