How to implement back and forth steering behavior?

I am trying to implement some behavior for a flying enemy in my 2D platformer.

The desired behavior is for the enemy to fly back and forth across the player, harrowing him.

Further, as my enemy approaches these target points, I slow his velocity in proportion to his distance to the target. In other words, I have a seek-with-approach behavior.

There are problems with this method. For example, if the enemy is currently to the left of the player and is seeking the left target point, if the player then starts moving left, the target point will also move left and the enemy will never reach it. It will appear as though the player is simply chasing the enemy. 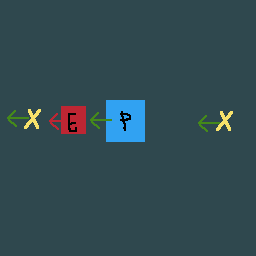 So my question is: How can I implement this kind of back and forth steering behavior, accounting for the fact that the target can move? Is there a simpler way that I am not seeing?

I work in Godot, but would prefer an engine-neutral answer.

Browse other questions tagged 2d movement steering-behaviors or ask your own question.