I've been looking around for a while trying to figure out how to play simple animations with Unity via ONLY C# script, with no drag-and-drop involved. So far I've found various tutorials explaining how to manually set up a animation controller for each object, then manually select each animation state and manually create a transition then manually set the transition length to the most minimum possible etc...

I was wondering if there's a simple way to just do something like...

...WITHOUT creating an animation controller manually at all, I haven't been able to find any resource to do this simple thing yet.

Have a look at different approach on Animation using "SimpleAnimation" via new Unity's Playable system. 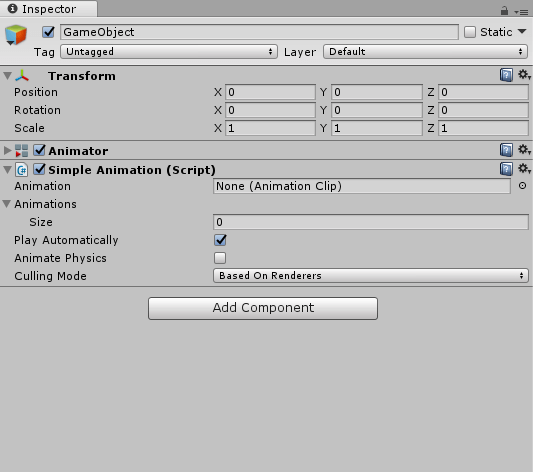 Under the hood it hacks the way using animator to play animation while controlling clip and state name from Playables, using new API set UnityEngine.Playables.AnimationPlayableUtilities

But now you can add states easier by script since you are dealing with playables not RuntimeAnimatorController and their messy state system. This is how it looks like when you use it on your end:

It need quite a bit of initial setup but this official github will provide most boilerplate code for you:

Here is outline of setting up

Be discreet on Resources folder (!!)

Keep in mind that there is also another approach AnimatorOverrideController, which is also possible to do on script runtime level. But this is leaning more toward scenario such as having several actors with exactly same state machine but with different AnimationClip override for each state.

Without using the Animation Controller, you can use Animation Type to Legacy.

Then All you need to attach the script to animation object.

I would recommend using an animation controller if you will ever need to blend animations or do any kind of complicated state. If you don't want transitions, you don't have to add them, just call Animator.Play("state_name").

But, if you just want a simple way to play single animation clips, you might be interested in this blog. Unity created that exact component, and you can grab it from GitHub.

Although it is considered obsolete in favor of the much more powerful AnimationController, the good old Animation component still exists.

It provides you with a very simple way to play an animation clip: GetComponent<Animation>().Play(clipName, mode);

However, before you can play an animation clip by name, you first have to add the animation clip asset to the animator via inspector or using GetComponent<Animation>().AddClip(animationClipAsset, clipName);.

That means you will still need a way to get a reference to the animation clip asset. The easiest way would be to assign it to some inspector variable. But you specifically said "no drag and drop involved", so you might want to get them through Resources (also no longer recommended) or through the new Addressable Asset System.

To play animation during runtime you need to following things:

7
Better animation of elements in SFML/C++
14
Data-driven animation states
2
Programmatically creating sprite animations in Unity
1
I want to test the Animator component of a gameobject using nunit, but I am having issues
3
Blender rigid body physics animation into Unity?
0
Merging multiple FBX files into a single gltf