How can I reduce aliasing in my outline glow effect?

I'm trying to replicate the glowing outline effect in the Left 4 Dead game. The effect causes an objects outline to glow, even when the object is occluded. Here is a screenshot of the effect: 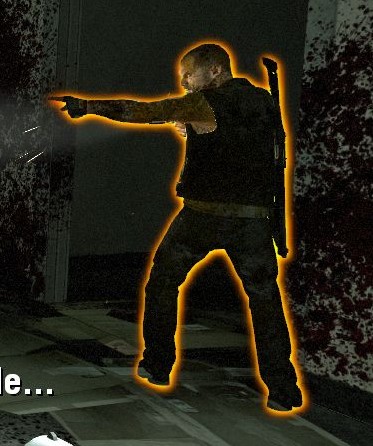 I'm somewhat able to replicate this effect in my OpenGL based program. This is what I'm currently doing:

Here is a screenshot of my approach: 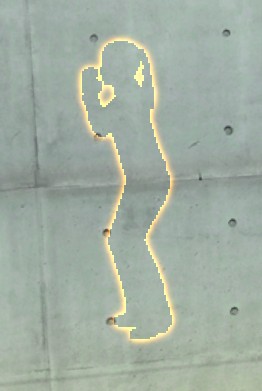 Here is the fragment shader that combines the glow texture with the scene:

As you can see, it seems to work for the most part, but the aliasing on the outline is really bad.

Does anybody have any suggestions for smoothing the inner edge of the outline?

Should I be sampling the neighboring depth values of each pixel and scale the glow based on the number of depth values that equal 1.0?

Or is there a better approach that will produce smoother results?

Maybe instead of checking it against the low-resolution depth buffer you might use the stencil test. When rendering the normal scene, you just render the object that should glow into the stencil buffer (without depth-testing, I think) and then blend the complete glow texture in, but configure the stencil-test to only pass where the stencil buffer is not set, therefore masking out the high-resolution object.

This way you get the exact silhouette of the original object, whereas a smoothing of the edges would only lead to approximate results, but maybe these would suffice for you.

Not the answer you're looking for? Browse other questions tagged opengl shaders glsl glow or ask your own question.

5
How would I display a unit that is hidden behind another object
3
How'd they do it: TF2 payload cart glow?
1
Draw character silhouette when not visible

0
Formula for replicating glTexGen in OpenGL ES 2.0 GLSL
4
Why are my texture coordinates always (0,0) in this shader?
4
Changing the color of some fragment of a texture using shaders
0
OpenGL RTT FrameBuffer question and Rendering to texture while sampling it
4
GLSL Atmospheric Scattering Issue
1
Can drawing to an FBO be done purely with a depth input texture, or do I also need a color attachment?
11
How to hide a post-processed mesh outline when/where the mesh is hidden
0
OpenGL Parallax Displacement Mapping Not Working
2
Sobel Edge Detection on Depth Texture