Figuring out if two objects overlap on screen

I want to figure out if 2 3D models overlap on screen. My general idea is:

For step 1 I've used the answer to this question. But I'm having problems implementing step two.

I wrote the function below but its giving me inconsistent results. The numbers seem good for corners that fall inside the view volume (after multiplying by the ViewProjection matrix). But if an object falls off the screen the numbers seem incorrect. What am I doing wrong?

If you see the attached screenshot you see two semi-transparent stained glass windows. 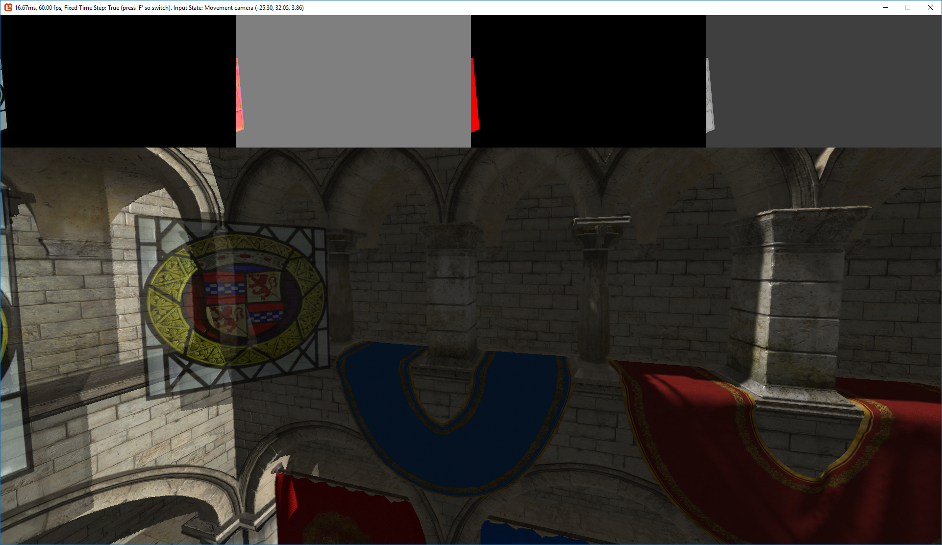 As you can see the projected coordinates for the only partially visible window are gigantic. I would expect MaxX to be something like -0.9 and MinX maybe -5. But the numbers are way off.

Here's a second picture where I've added a visualization of the projected rectangle. On the left you see the exact scenario where it goes wrong. The right side of the rectangle for the partially visible window is incorrect, while if I slightly wiggle the camera either way you get the result on the right with the correct rectangles around the models.

you may try this 3D position to Screen position , I use this and works on my end ^ _^ y

I forgot to mention that there's a built-in Viewport.Project and Viewport.Unproject from the framework that intended to do exactly the same thing.

So @DexterZ splitting out everything that happens with the matrix transformation helped me reason about the code.

It turns out w is only negative when the point being transformed is behind the camera instead of in front of it. A simple abs() reflects the w component so that its correctly transformed to screen space again. An ugly corner case.

This is what I ended up with in the end, and it seems to work well so far:

Not the answer you're looking for? Browse other questions tagged monogame projection overlay or ask your own question.

15
Faking isometric graphics in a 2D space game
2
How to determine the visibility of a single vertex, given a viewpoint?
0
Depth of overlap between circle and rectangle
2
Problems with converting from Screen Space to World Space
0
Monogame smoothing out tile to tile movement
0
Nonsense error in the overlap between 2 warriors and a tower
0
Overlap detection does not work correctly when there is more than one warrior colliding with the tower
1
Tiles on sphere - check visibility