How to randomly create a fair maze for a multiplayer game?

I am creating a 2d multiplayer RTS game which happens inside a maze. I have used Growing Tree algorithm to randomly generate the maze. I thought that the maze would be fair for each team as long as each team's shortest path to solving the maze is equal to the other team. I made sure of that by making a rule in my game which dictates that each team start point is the other team's finish point and vice versa, so the shortest path would always be equal for both teams. but in practice, I noticed something else.

this question sprang up on me when I was trying to make the resulting perfect maze to a non-perfect maze using this solution, specifically @tobias-k answer.

if you already have a maze with a single path form start to goal, use this variant:

The generated paths might have (maybe even substantial) parts in common, but they should be unique loop-free paths from start to goal. Here's an illustration of the first case:

However, when I use BFS to calculate all distances from my start and finish point, and before removing a wall to create a non-perfect maze, I mostly get something like this: 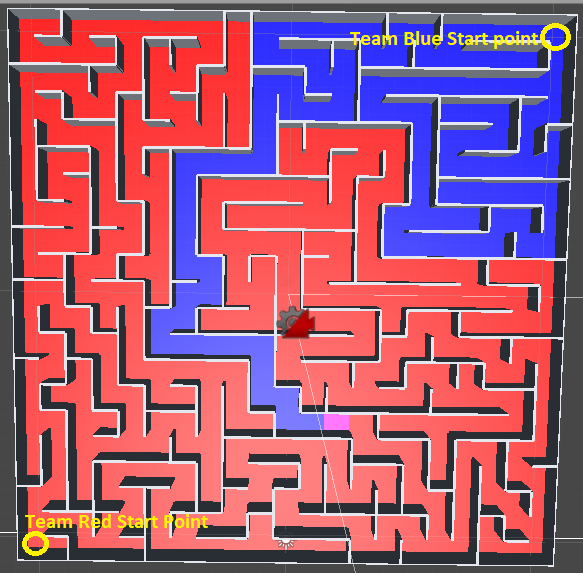 in this picture, 336 cells are closer to team Red start point and only 105 are closer to Team Blue start point. Even removing a wall (or more than just one wall) between these two sections does not help the situation.

My game is about collecting the treasures that are randomly spread throughout the maze and getting out before the other team exits the maze, this resulting mazes are totally unfair because it gives one team the higher chance of reaching more treasures in the maze sooner compared to the other team.

so my qustions are:

Interesting question, a really simple solution would be to create half a maze and mirroring it. If you don't want a perfect symmetrical maze then I don't have a solid solution for you but I have some thoughts about the steps to take to make it fair for both teams. First creating the perfect maze.

However, when you start from a imperfect maze or randomly remove walls the problem will get a lot harder to solve. So once you have placed the teams fairly in the perfect maze you could do the following.

This should be possible with the growing tree maze algorithm, I mostly used recursive backtracking for my mazes and mostly based my experience on that.

Not the answer you're looking for? Browse other questions tagged algorithm multiplayer graph maze .