Building forward my text adventure i stumbled upon how to actually drive the actions that can be caused by dialogs. I wrote the dialogues and the logic around handling them already, but i'm missing a key about how to turn a dialogue into an 'engine' specific action (like spawn item, drop, buy, sell).

My game is absolutely based on JSON therefore even dialogues are stored there: 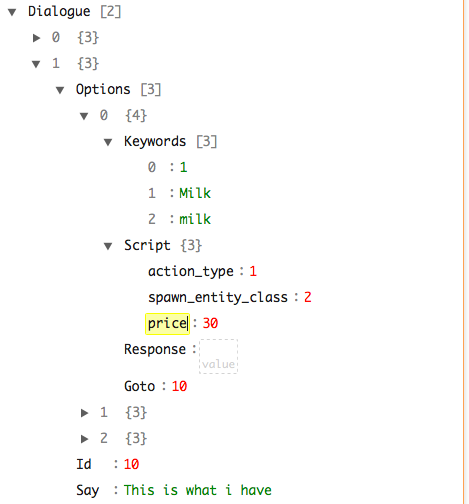 An Option is what a player can choose by typing one of the defined Keywords for currently displayed dialogue.

Response is what a player sees when option is chosen

Script is nothing more fancy than a list of strings with integers that get mapped into a std::map<std::string,int> and later passed for the execution. Think of it as of flags.

Let's look at the example below - where you could buy something from inn keeper.

In above situation, you can talk to the keeper and choose:

Let's say i want to choose option "1" and it boils down to the design now.

How would you turn that "1" into a real engine action of buying an item?

As you might have seen i have defined a Script within the option of the dialogue, this would be just a map (string to int) of attributes passed to an interpreter.

Then the interpreter executes that based on 'action_type' - which is defined in json, mandatory and describes type of action like here: 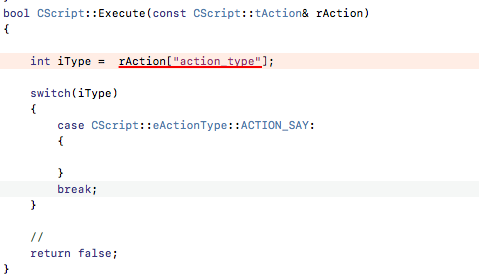 1) Is it the valid approach to write my own interpreter - maybe i can use it somewhere else? or i should start thinking about external scripts - which actually require me to focus on adding library and learning it, instead of doing the game itself.

2) Which class should be really responsible for actually executing the script with the data passed from dialogue.

3) Maybe you can think of a different way to handle this situation? Basically a translation of a text(json) data into a game logic.

Brief context: I work on a fairly large LDMud with mostly (but not entirely) hard-coded objects subclassed from a few primary blueprints. I spend some of my time trying to improve our long-term maintainability by refactoring common patterns out of the "content" objects and into the core.

This standard process for registering and handling commands will free you up to move any specific command around fairly easily, so you can write the command on the most specific object it makes sense on and move it towards the core (generalizing, parameterizing, and pushing messages/paramters out into JSON) later. It also means the JSON command descriptions can differ circumstantially in the beginning, so that common structural patterns emerge from real use.

Not the answer you're looking for? Browse other questions tagged c++ architecture text-based .

0
How could I expose the engine API for text-adventure games?
7
Distinguishing between multiple objects with the same name in a text based adventure game/interactive fiction
2
Choose your own adventure console program
13
Creating a Robust Item System
3
How can I un-bloat my player input processing in my text based game?
0
Command Shell text adventure - input methods for scrolling through text (lua)
0
Make types, levels, armor and weapons for an text based adventure game, java