I've been getting started with personal experimentation and have been working on a project for a few days now using SDL2. It is a 2D game, and at this stage I have it rendering game objects in a fixed-size viewport that can navigate around the 'game world'.

I'm not terribly well-versed in linear algebra yet, so it's possible that the answer to this question is somewhere in that curriculum that I have yet to tackle.

I've started to think about implementing 'zoom' functionality. At the moment, all that means is that the viewport is scaled up or down (to certain size limits), and the game entity's dimensions are scaled up or down correspondingly. What isn't transformed are the coordinates.

Visually, this is the basic problem: 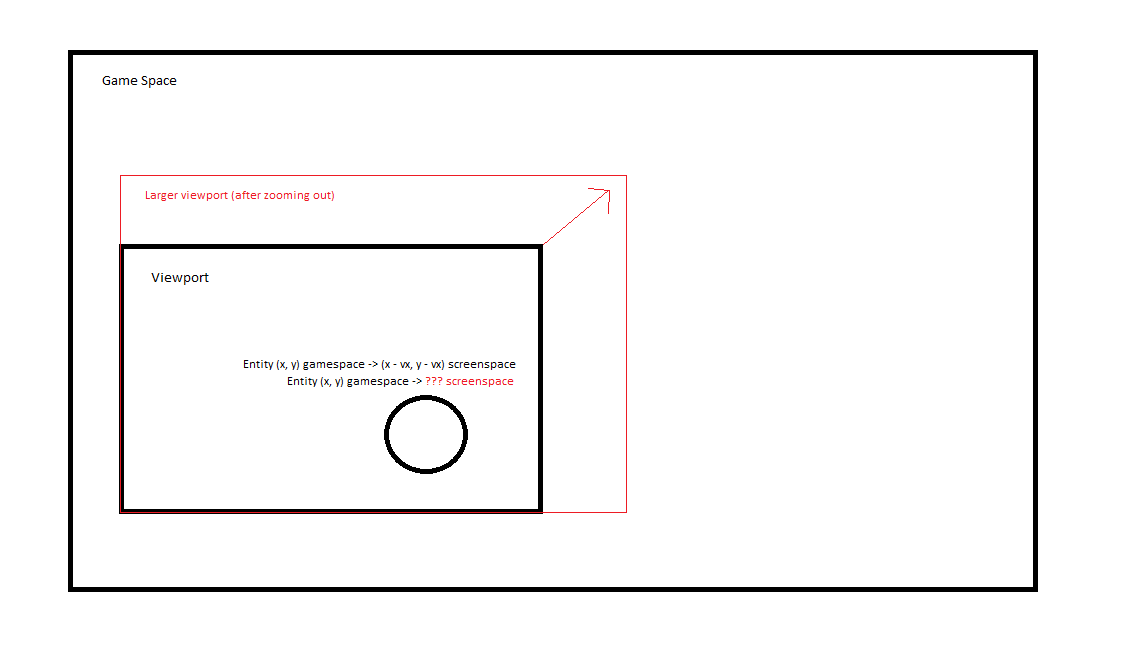 What are the mathematical techniques/principles I should be studying to figure this one out? Thank you!

This is all covered by Translation, Rotation (not mentioned by you) and Scaling. You can write separate functions for each transformation but usually it is done using homogeneous coordinates and Matrices. By this you can define arbitrary sequence of operations and perform them on any point.

Here are the three Matrices:

Translation (Translate a point by (X,Y)):

Rotation (rotate a point by a):

To transform a point by any matrix you need to add a 3rd coordinate to your points which is basically just "1":

Now you can multiply any of the above mentioned matrices with your vector and transform it:

If you want to combine operations you can multiply your matrices and then multiply each point with the result. So you can calculate a transformation matrix based on your viewport once and transform all points before drawing them.

See this question for more detailed information about homogeneous coordinates

Not the answer you're looking for? Browse other questions tagged 2d camera sdl2 scale viewport .

2
OpenGL: Move camera regardless of rotation
5
How do I calculate the boundary of the game window after transforming the view?
11
Confusion over GLViewport
0
Libgdx Box2D and Screen Viewport Scaling
1
Error in projecting coordinates from FitViewport to screen in LibGDX
0
How do I deal with this tilemap wraparound edge case?
0
Unity | Camera - Follow target with view port point's offset from center
2
Spritesheet with unstable width