How can I add left and right movement to my sprite without reducing forward movement?

I've made a character sprite that moves left and right when I press A and D, and moves forward automatically. However, whenever the character moves left or right, the forward movement is greatly reduced. Does anyone know a solution?

Here is my blueprint 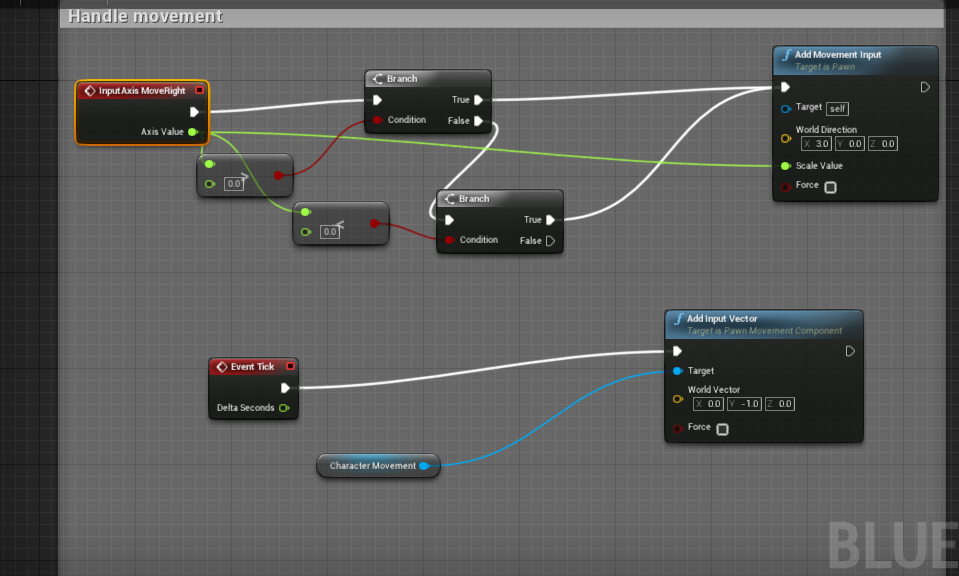 Imagine you are driving a car down a street at a certain speed. You then steer to the left. Your car is still going the same speed forwards in the direction the car is pointing, but the distance you go down the road while steering will be less. That's because your car is spending more time traveling sideways to the street than longways down the street.

You could get all fancy and do vector math to speed up the sprite to keep forwards motion the same when turning, but it is a lot easier if you just calculate X and Y offsets yourself and not rely on vectors.

Assuming that X is side to side, and Y is forwards, it would be something like this in pseudo-code.

With this kind of approach, any side to side motion will not slow down the forwards motion. Sorry I don't know Unreal enough to create a blueprint for this, but you should be able to translate this concept into a blueprint.

Try summing everything in a tick event.

Not the answer you're looking for? Browse other questions tagged movement input unreal-4 blueprints or ask your own question.

1
As3 Character movement in diffrent directions with labels?
0
Unity - Invert Movement Direction
17
How to avoid movement speed stacking when multiple keys are pressed?
0
Rotate sprite direction Cocos2d
0
Moving left and right not working as expected
0
How can I make my movement continuous?
0
How to make 4 way walking animation in game maker studio 2?
1
How can I rotate the cube left and right?
0
Where is the part of the code of the mouse click in the TopDownCharacter blueprint?