I want to to develop a game like Populous: The Beginning with my friend. But we could not find out what type of geometry they have used for the world.

So.. It cannot be a Icosahedron, because there are triangles, nor cant it be a standard sphere geometry, because not all tiles have the same size.

Can someone help me?

Triangles you are seeing are likely just a product of the rendering system -- everything, in the end, has to be broken down into triangles for rendering.

I suggest you do this: search google (images) for "sphere tessellation". You will get an idea of the many, many ways of doing this. Your game does not need to be tessellated in exactly the same way as Populous: The Beginning (which, by the way, is a great game which I love). Meaning you don't even need to use square tiles, if you don't want to; you could use any hexagons, triangles, pentagons, arbitrary quadrilaterals like kites, or even voronoi tessellation (irregular, non-repeated polygons).

What's important in any tessellation used for game logic is connectivity, i.e. the fact that your "grid" forms a (somewhat) connected graph for movement purposes.

EDIT: Probably what they've done is something a little like StarControl's melee -- they actually have a wrapping 2D grid (modulo in x and y). Then, when you view the sphere, you can only see one hemisphere at once, which makes it possible to map the tiles without too much noticeable distortion. And at a closer zoom, all would look perfect.

The problem here is that Populous maps are not spheres at all. They're a Real Projective plane, more analogous to a flat torus manipulated on screen to look like a sphere than an actual sphere.

The game is played from a 3D third person perspective with the camera at a variable height and capable of rotating 360°, enabling the player to quickly move across the planet's terrain, which is actually a real projective plane rather than a usual sphere; on maps where there is no fog of war, players can see what opponents are doing at any time. Extensive support for 3D acceleration enables the player to view the game in 16-bit or 32-bit colour.[10] The landscape and real-time structure building and follower movement are also shown. 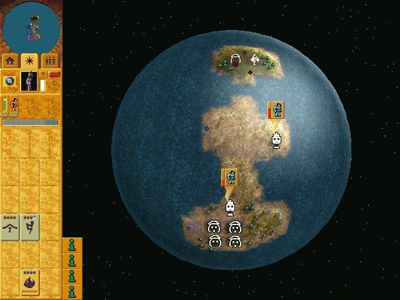 If the overview is of half the planet, as it the minimap, why does the minimap show so much more water? And why does the water texture not reflect the true proportions of a sphere by showing an almost side on view at the edges?

Also as noted in comments on the other question, notice in this screenshot the planet is perfectly round: 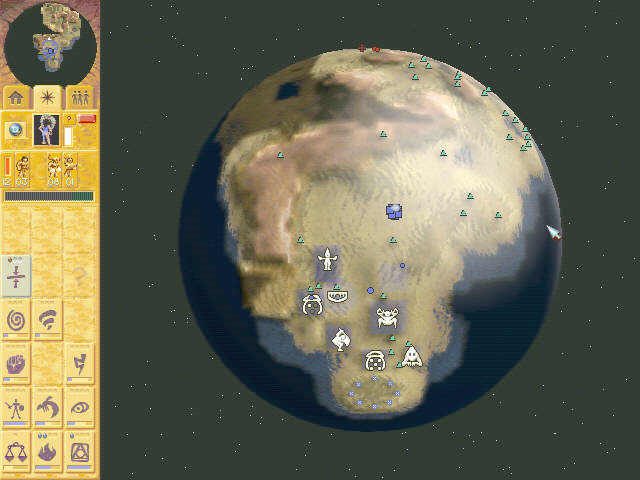 If it were a true sphere, we'd be able to see hills and objects sticking up from the edge of the planet. For example, here's Planetary Annihilation, see the trees and cliffs jutting out over the horizon: 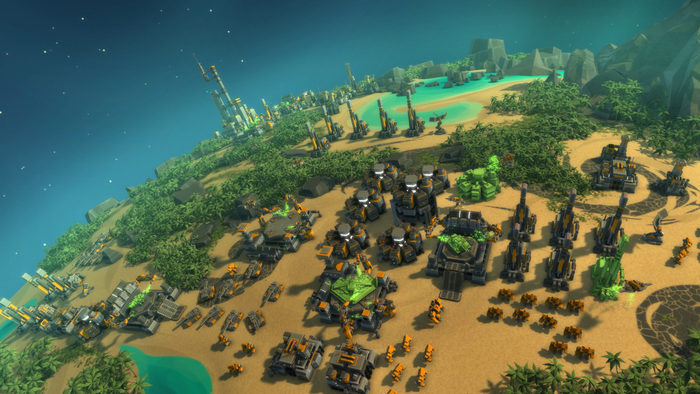 Instead, for a modern game I would advise tessellating an icosahedron. You'll find many questions on SO on how to do that in a programming language of your choosing

Not the answer you're looking for? Browse other questions tagged 3d geometry or ask your own question.

7
Am I going to regret using a color based collision detection system?
6
Would like some help in understanding rendering geometry vs textures
0
Scanline filling of polygons that share edges and vertices
2
Moving an object toward another object on sphere knowing their quaternions
10
Procedural Geometry Generation
2
Why is there high performance hit with many meshes?
0
Should I avoid rescaling models when rendering?
1
XNA C# 3D game Wall collision response glitch
1
How do you compute the tangent space vectors with normals given in the mesh?
1
Get the mesh Project Plane on Click and calculate its area