I'm working on a 2D, top-down driving game with some basic AI vehicles. The AI Vehicles move along a bidirected graph of positions. Each vehicle has a current position (from the graph) and a target position, but instead of linearly interpolating directly between the positions, the vehicles each have a maximum steering angle, and so must steer their way to the next point.

The vehicle is defined geometrically as follows: 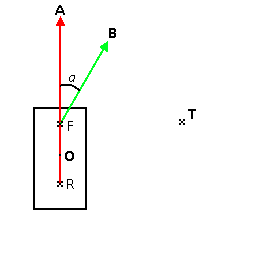 The vehicle's heading is only changed when both the steering angle is set and there is some forward motion (i.e. the vehicle cannot turn when standing still).

As long as the target T is sufficiently far enough away, over time the vehicles can be correctly steered towards the targets.

The problem is, when the target is defined too close to the front axis, the vehicle can never reach the target, as the turning arc is too large (they drive around the target indefinitely).

I think the solution is to first detect if the target is 'too close', and if so, the vehicle needs to reverse a little first, and then begin driving forwards again. I think this would be achivable by defining a circle adjacent to the vehicle to detect if the target point can be reached based on the maximum turning angle and current position - but I don't know how to create such a circle. Something like: 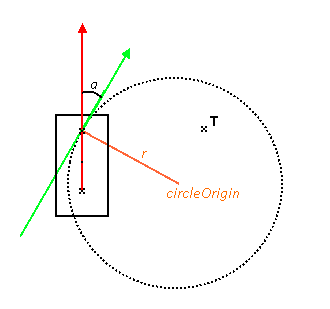 How can I create a circle (the origin and radius) from the current vehicle position and max turn angle? Is there a different, potentially better solution?

edit The following is how I update the position of the vehicle. In a nutshell, the positions of the front and rear wheels are first calculated, and their positions are independently updated. Then the new position of the car is worked out from there. I cut a little for brevity, but it should be enough to see how it works:

you have to move to turn your vehicle. Otherwise you would not have the Problem.
If you know the distance, you can calculate the radius: 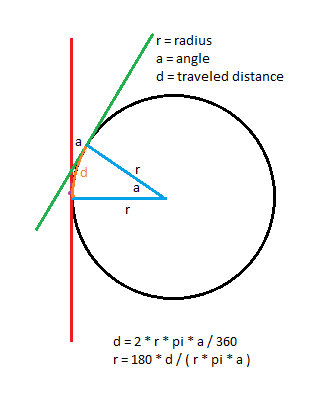 the origin is a little bit more complicated. You have to know around which point your vehicle turns. From this point you have a line (vector) with the length r and in an 90 angle to your car.

Not the answer you're looking for? Browse other questions tagged mathematics geometry linear-algebra .

11
How do I calculate paths for objects with limited acceleration?

8
Projected trajectory of a vehicle?
0
Finding the angle of a line given 2 other lines
1
Calculating angle between two vectors to steer towards a target
5
Discover x,y coordinates given set arc distance and rotation
3
Precalculate the position of a rotating Aircraft
3
Math to steer a car
3
Circle-Circle collision resolution
1
Simple 2D vehicle physics - maintaining vehicle length
3
How can I move a vehicle using speed and steering angle?