But, my problems are of course inspiration for levels...

Is it possible to publish my game concept and ask community for level designs? And still keep my game concept save from being copied by others. Do I have copyrights on a game concept for a game which isn't officially released?

And if I should ask community, should I do an action like, for everyone who submits an approved level design (not the xml, but only a sketch), they receive one cent per sold copy of the game?

What do you think? Tips, pitfalls?

Thank you in advance!

For the interested people, here is a screenshot from the level-editor: 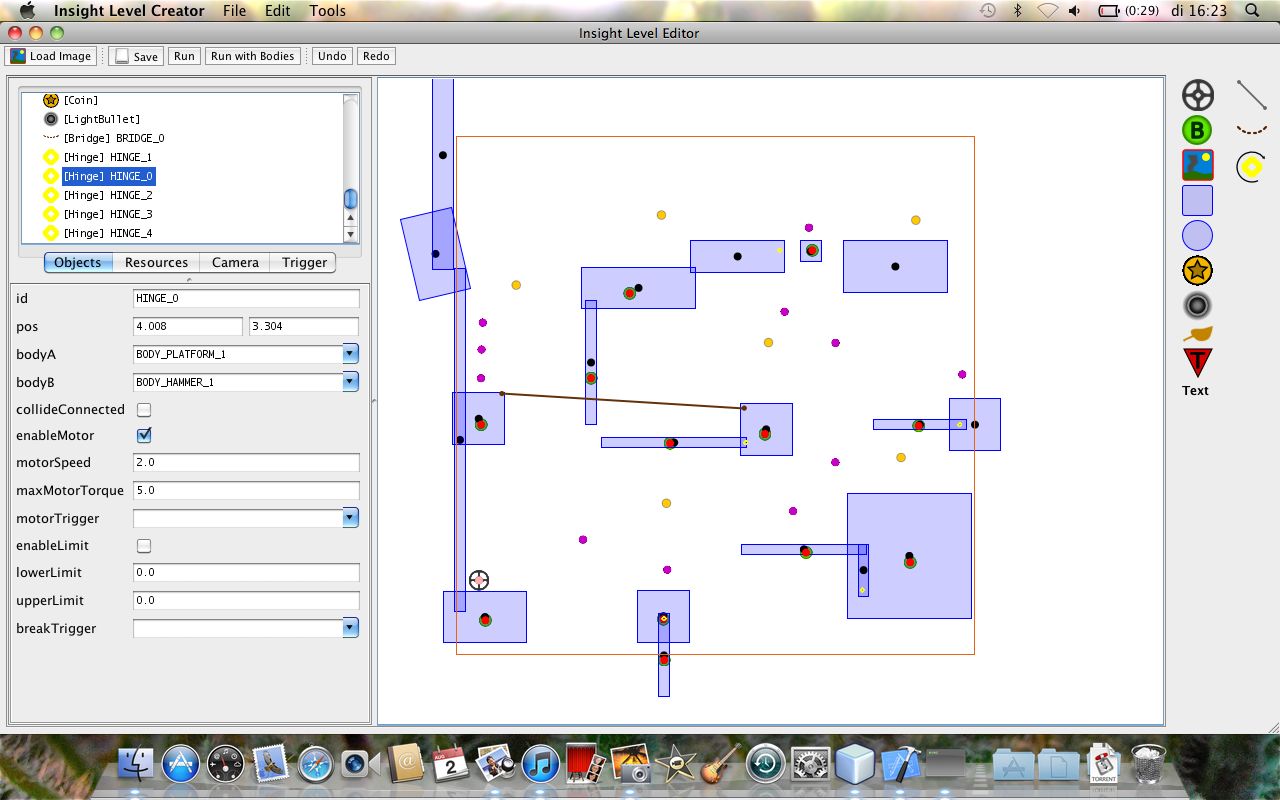 The best solution (or at least, the one that's been done many, many times before with decent success) is to release your game with a set of levels made by you (or possibly a friend, or a level designer that you hire, if you can afford one), and then release the tools used to make those levels. If people like your game, then they'll build levels for it, and if you encourage this, you'll have all sorts of people making content for your game with very little effort on your part. Done properly, this can extend the life of your game and encourage new people to buy it.

The trick to all of this is to have a good set of levels to start with, which will encourage people to buy the game. One possible idea is to give the game (and level editor) away for free, but make it so that you have to buy the game to play more levels.

Basically, you lack the only interesting thing which people actually play platformers for. All these technical stuff you've listed can be done rather quickly compared to the interesting game levels. Levels need a lot of thought, work and polish, also they tend to spawn features when some idea cannot be expressed by existing components. So if you don't have the levels, you don't have the game.

Summing up, you're basically going to publish a specialized game engine and ask people to make your game for you in return for a small fee while forbidding them to use this engine for anything but your own idea. Capitalism, ho! I've never seen it's done, considering how hard it would be to make a consistent game out of levels made by many different people. Just remember how nicely levels were themed in "World of Goo" versus list of abrupt challenges in "N".

If you don't mind these things, I guess it could work in theory, lets consider criteria for the best case:

All points considered, it might be best to employ a "level-driven development" (think of possible cool applications of game mechanics, then build levels around them) or find yourself a level designer to do it for you. Also if your concept is good, it will be stolen regardless of what you do. Don't worry about it, real value lies not in a concept but in what you do with it.

Let's take the basic legal first. Your copyright applies no matter if you have released the game or not. You do not have copyright for a concept, only for the very game you made. Except for extreme plagiarism you do not have means for stopping other people from making a similar game.

Given that you basically have no community, and is unlikely to get one unless you have a good game, it would be hard to ask them. The better a game you have already made, the easier it will be to persuade other people to build upon it.

For now, if you can't make levels on your own, I think you'll have to pay someone, and for a physics game it's probably a pretty big job, good or bad levels tend to really make or break those.

There are multiple questions here, but I'll only answer a couple.

Is your game concept safe? It doesn't matter. The true success of a game is in the implementation, not the idea. The only games that get cloned exactly are those which are already successful. Any decent game designer will have a hundred unmade ideas of their own, and no one will be able to implement your concept better than you.

Not the answer you're looking for? Browse other questions tagged level-design publishing .

2
Level Design V.S. Modeler
1
How do I simplify a 2D game grid for level management while keeping its by-pixel features?
5
Level design for puzzle game with a single mechanic
3
Level design - modular vs single project