Physics - How to calculate the next position of a ball rolling against a slope?

For a small C/C++ game project, I want to add some physics on a ball, to allow it to roll against the slopes of a 3d world, in the same way as the example visible in the image below:

However I have very few skills in physics, and I have some trouble to understand which physical laws should be applied, and how concepts like energy, force and acceleration should be used here. As a beginner, I imagined the situation as follow: 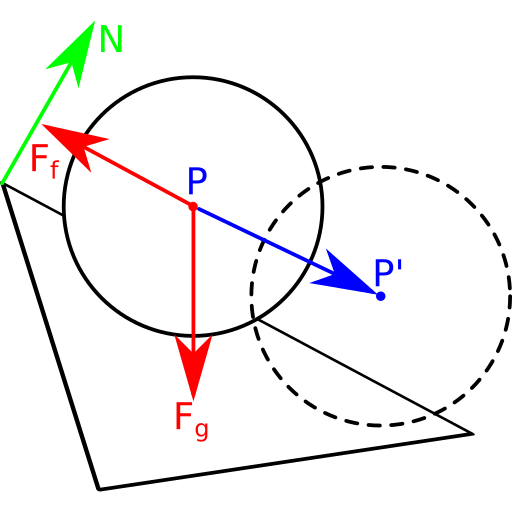 I also wrote a dedicated function to calculate the physics on my ball, which is called every time a frame is about to be rendered. When this function is called, I know:

This gave the following code:

It works very roughly. The ball actually rolls down the slope, but never stops. And if I try to throw the ball from the bottom of the slope, it accelerates instead of curbing.

Obviously something is pretty wrong, but what? As I say above, I'm not an expert in physics and I think I tend to confuse notions such acceleration, force and energy. However I tried to resolve this system by myself, without success.

So I would be thankful if somebody can explain to me:

IMPORTANT NOTE I know that there are many physics engines, commercial or open-source, like e.g. Bullet, Box2d or Havok, which I may use to resolve the above issue. THIS IS NOT MY OBJECTIVE, I wan't to use them, at least for now. I WANT TO LEARN AND UNDERSTAND how to resolve this issue before using such engines. And I think that the proposed problem is simple enough to serve for this purpose.

Finally I found an acceptable solution, based on the following article: The Physics of Golf (search the "Rolling on inclined planes " part)

I'm aware that it is anything but perfect, but it works sufficiently well in my small simulation. Thanks to all which taken a time to post an answer, this really helped me. ď»ż

Here is my solution:

Not the answer you're looking for? Browse other questions tagged c++ physics algorithm physics-engine .

4
3D Ball Physics Theory: collision response on ground and against walls?
4
Friction due to gravity in an impulse based physics engine
0
How to add a constant horizontal force just like gravity?
2
How can I calculate the future position of my moving object?
0
How to calculate/detect the force of a collision? (Game-Maker Studio)
3
How to predict where the soccer ball should be intercepted by an AI player after being kicked?
0
How could I move an object, while respecting the gravity and other related physics in Unity?