I'm trying to calculate the output damage of a skill. The skill can go up from level 1 to 100, it can scale with own levels and the attack of the character. 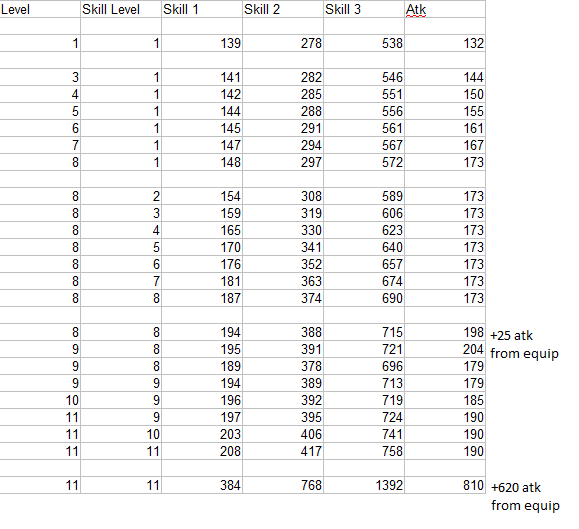 I need a formula for determine the amount of damage that a skill or ability can do.

I have some data that I don't have create myself, but I just taken from a game.

The skill damage is linear but influenced of character's attack, so more attack the character has and more damage can do the skill.

A character that we call John has the follow parameters

Max stats that John can reach

The current stats of John

When the skill was a previous level

In theory the skill damage should get 7 points for level, of course with the current amount of John's attack, but is linear.

Browse other questions tagged mathematics character linear-algebra or ask your own question.

121
How to develop RPG Damage Formulas?
2
RPG Chance to Dodge formula
10
How do RPGs balance linear damage formulas?
7
RPG Formula - Attack and defense
1
How to calculate suitable attack speed
4
How to create characters randomly with a given skill and weighted abilites
0
Need Help Figuring Out Damage Calculations for Diablo RPG Clone
1
How do I calculate/weight a diminishing damage formula based on N targets?