I'm trying to do realtime lighting, and my shadows are acting very strange. When I project a spotlight out from the camera (like a flashlight in a first person game) my shadows show up as 3D skews of the objects, and I can actually clip through them if I move the camera in the right way... if I detach lights from the camera and just have them sit in one position, I don't seem to have this issue (cylinder to the right is just the model Im using for the flashlight... its attached to the camera):

Just like your main rendering camera, your shadowcasting lights have a near plane. They can only see geometry that's out past the near plane - anything closer along the light's axis gets clipped out.

As described in the Unity manual on shadowing: 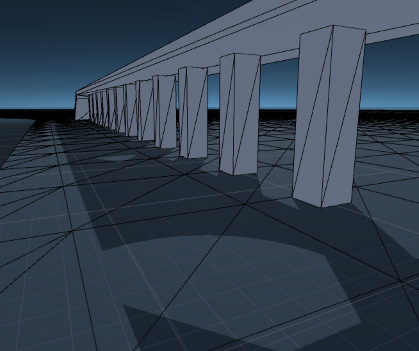 When you let a shadowcasting light get arbitrarily close to an object, eventually the object will clip that near plane. The clipped region will no longer be visible in the light's shadow map, and so it won't block light from reaching content further away.

As you've found, just reducing the light's shadow near plane parameter alone won't fix this issue - we can't reduce the near plane below about 1/100th of the light's range for a spot light, or 0.1, whichever is smaller. (This constraint helps keep the shadow map's depth precision well-distributed over the light's range, to minimize shadow acne and leaking). If our light can get closer to the object than that, we're basically* out of luck.

So, we need to keep the light from pushing that close to an object. One way you can do this for a moving light is to check it against the object colliders, using eg. SphereCasts or ComputePenetration to find a safe place to stop the light before it clips in.

Whatever collision shape you use should encompass the whole tip of the light cone closer than the near plane, so don't forget to account for the width of the light disc at near plane distance. ie...

To help match the collision volume you need for good shadow rendering against the rendered geometry of the flashlight, you can situate the point of the light itself deeper inside the housing of the light source, and use the front lens/reflector section to fill out the no-go zone for collisions.

* I say "basically" because there are potential workarounds, but they're not pretty. For most cases, you're better off keeping the light slightly away from potential occluders.

If you really need close shadows though, you can set up a kind of cascaded setup, stacking:

Not the answer you're looking for? Browse other questions tagged unity graphics lighting graphics-programming shadows .

2
Isn't it redundant to implement both lights and shadows?
2
Unity - Loss of detailed shadows and shading marks on texture seams appearing after lightmap baking
1
Proper indoor lighting without directional light