Is it possible in Unity to make some sort of bounding box (with a running application) within the current viewpoint of the actual screen?

I'm working on a project which uses a projection for visual output, the screen I am projecting on is smaller than the actual projectors resolution. This means that the unused spaces around the actual working application, are black and visually hidden.

Made an image for exra explanation: 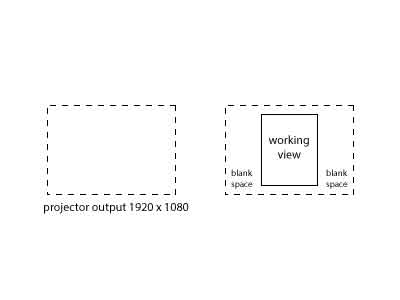 As i'm new to Unity and still learning, I'm not sure if this is even possible because of the use of camera's and environment. I happen to know that it's possible in three.js. But if anyone could point me in the right direction or explain that it's impossible would be much appreciated because I'm not sure where to look anymore!

You can include another camera (full screen) that doesn’t render anything but has a clear color of black and has a depth set so it renders before the main camera to ensure you get black around the edges.

The values are relative to the size of the screen (or rather, the game window, if your game is not running in full screen) as a percentage. Taking .5 as an example, as a coordinate (x or y) it refers to the center of the screen, and as a dimension (w or h) it refers to half the screen size.

If you add up the coordinate and the dimension horizontally (20% + 60%) you will get 80%, representing the right edge of the image. Note that 100% - 80% = 20%, the same as the left edge inset, meaning it is therefore centered on screen horizontally.

Yes, you can do it easily in unity. But first, you need to understand Camera, RenderTexture, Canvas, and RawImage in Unity.

Below is step by step procedure to achieve the result you wanted.

I hope this helps!

What actually happens here is we transfer Whatever Render into the new camera to "RenderTexture" and make it render back to the scene using RawImage.

Not the answer you're looking for? Browse other questions tagged unity camera projection viewport .

3
How to prevent 2D camera rotation if it would violate the bounds of the camera?
3
3D zooming technique to maintain the relative position of an object on screen
12
Camera for 2.5D Game
2
Trying to project a point onto a cubemap
0
Using IPAD's as controllers for a Unity game
0
Unity rotating camera around specific Vector
1
Record video and sound from device camera and show it as a texture
0
Unity app crashes when using unmodified custom Android manifest (didn't find class "UnityPlayerActivity")
1
Can't open scripts in Unity 2019.2.11.f1 version