What are good algorithms to generate borders / state areas on 2d star maps?

I'm trying to generate a fairly large two-dimensional star map that shows different factions / states, each owning one or more star systems. I'd like to automatically create borders / areas for the factions.

The idea is to essentially go from something like this (the dots represent star systems on a 2d plane, colors are faction affiliations) 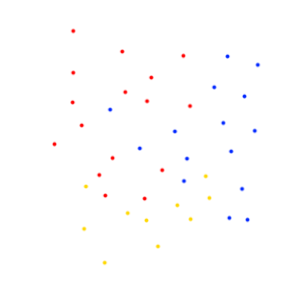 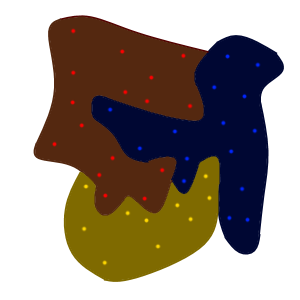 Generating maps like this seems like a fairly common requirement, so my actual question is this: Are there standard algorithms for generating state areas as shown? If so, could you point them out to me? If not, can you think of a good algorithm (basic idea or pseudo code are fine)?

The algorithm's performance is not a primary concern to me, so I'd rather have a "prettier" map than a faster-to-generate one. This similar question offers an approach that is probably applicable to my problem, albeit with some "prettification" needed: How to create a map from graph

Let me explain what I mean when I say prettier: At the bottom of the linked question, the asker presents her end result after implementing the accepted answer. My first issue here: The areas for nodes #6, #9 and #12 are very small and oddly shaped. Also, instead of the sharp edges, I would prefer a smoother, curved look.

My own ideas so far, including the respective drawbacks / questions I see with them:

Your help is appreciated.

Addendum: After thinking about the first two answers and their respective approaches to solving the problem, I've realized that my requirements above are incomplete.

I have to add that the map can have sparsely populated areas, meaning that there may be an isolated star or cluster of stars. I'd like to display each of those clusters with their own contiguous colored area. Something like this: 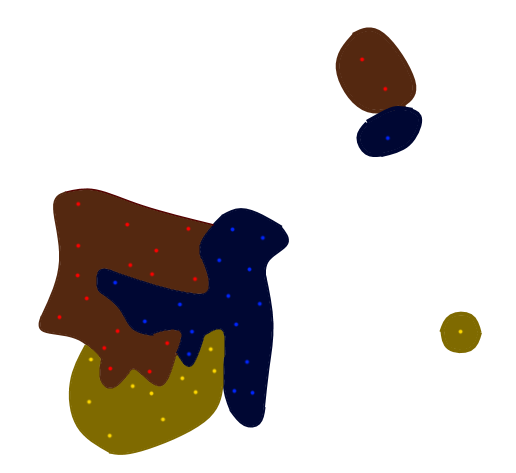 I realize that this might necessitate a first step which identifies clusters, and then running the actual algorithm for each of the clusters.

I think the Voronoi idea is a good one. Each star becomes a seed point for Voronoi, and then the Voronoi regions show the areas owned by each faction. However, there are some changes that will make it work better: 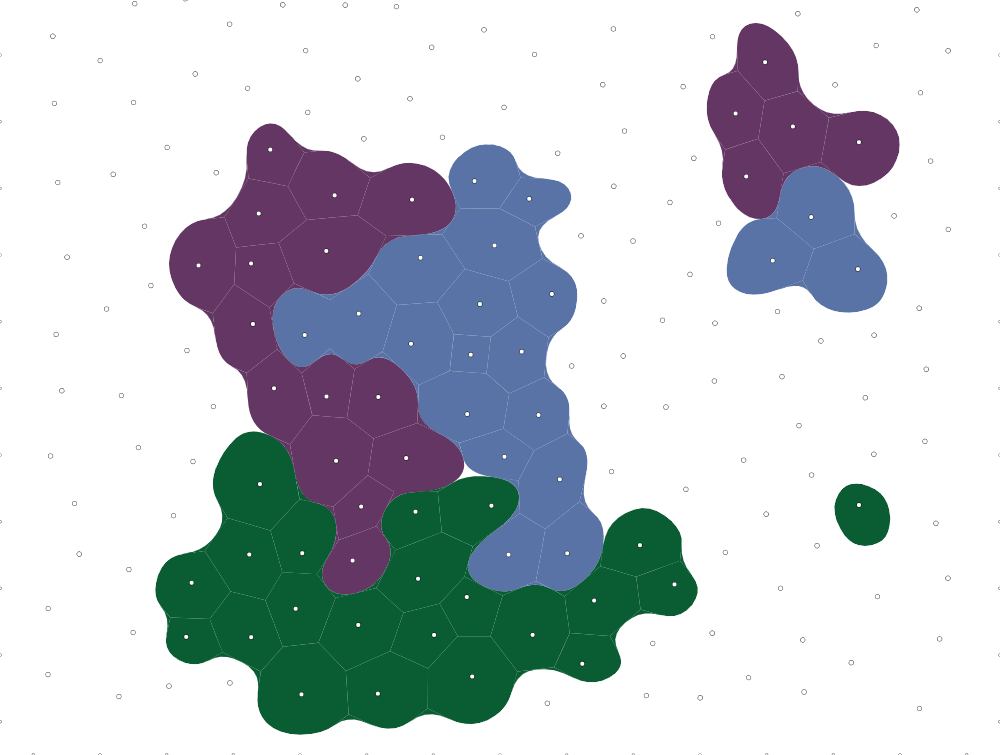 I also wrote a page which lets you paint the regions to see what they'd look like.

One of many methods is an influence map. You can search for specific code implementations, but the basic algorithm is fairly simple.

For each faction object (e.g. star system), assign a positive (hot) value. For all other factions' objects assign a negative (cold) value. The magnitude of hot or cold should be based on how much influence you think the object exerts on its surroundings and neighbors. These values do not have to be proportional if you ultimately want to keep a "dmz" between factions.

Use these details to create a temporary grid (e.g. array) that approximates your map's pixels. You can build such a grid to the resolution you desire including 1:1.

Rinse and repeat for each Faction on your map by creating separate faction grids for each.

Finally, interpolate the faction grids together to produce a contour of influence for each faction. Then transfer that grid back onto your pixel map given the resolution that you used for the grid (adding any faction specific colors, etc).

The art in this process is to determine how much influence each object should have and what game elements you use to quantify that value.

As an aside, the products of this method can be used for all kinds of other things, like your ai decision-making.

You should look into Voronoi diagrams. Here is the definition on wikipedia:

In mathematics, a Voronoi diagram is a partitioning of a plane into regions based on distance to points in a specific subset of the plane.

The basic points are usually randomly generated and are often called nodes. In your case, each node could be your stars. That way, the faction associated with the stars can be associated with the voronoi cell surrounding the star and when every cell has been calculated, you join those with the same faction together and you should have a pretty neat border around your stars.

FastNoise library has support for Voronoi Diagrams, so maybe you should look at it.

Smoothing of the regions

Keep your stars in a « safe array » and use a copy of it where you actually add more points via interpolation of the nearest neighbors and generate the diagram from those points. It should give you smoother regions.

Other ideas The fortune algorithm is based on a straight line that sweeps the cartesian plane. An interesting idea would be to use a circle to sweep the plane from the center of your galaxy/space instead, maybe that could lead to some interesting shapes too.

Your last idea of combining smaller polygons into bigger ones and then fixing the edges will require advanced spline algorithms to modify the shapes. Not sure if that would make it efficient or good looking. I’m pretty sure that the voronoi diagram with extra tessellation is the way to go as it fixes the edge problem by itself and can even offer some extra data by itself like the distance from the borders (which could be used to determine the zones of conflict between the different factions, the probability of encountering different kinds of ships, etc.)

Not the answer you're looking for? Browse other questions tagged 2d algorithm maps .

9
How to create a map from graph

10
Reduce the number of edges of a graph, keeping it connected
28
How can I identify feature regions in a procedurally generated world?
0
How can I locate empty space next to polygon regions?
5
Pathfinding Search for Path of Specific Length
3
How do I make a natural-looking map from some Voronoi regions?
1
Data structures for territories in a 2D map
9
How to create a map from graph
5
Level of detail for the map of stars
5
Map progression
0
Coloring a Voronoi Graph