Managing different types of Actors/Entities in a rendering engine

I'm coding a simple game engine using DirectX11, and I'm stuck on how to implement a kind of ECS. Now my rendering system look like this (sorry if the diagram is not real UML, it's just for description): 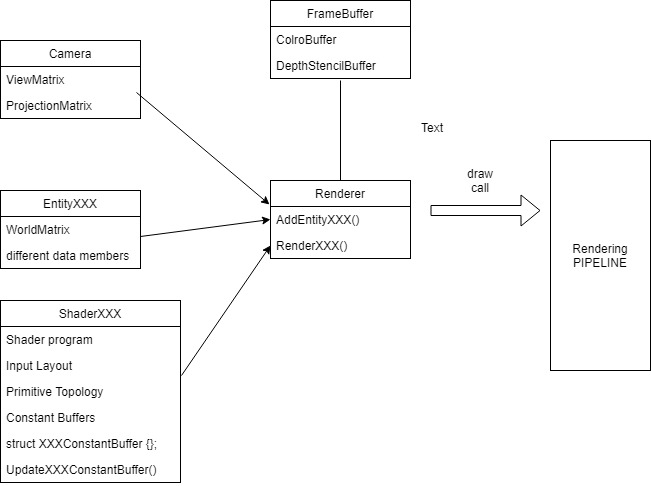 The architecture is really naive, I wanted to keep things as simple as possible, for learning purposes:

Now, since my engine will be more than a showcase of graphics features, I want to make each entity abstract, and I tried inheritance, but since each entity has its own "identity" it's not viable approach: an entity representing a player needs a Move() method, position and velocity state variables, while a terrain entity doesn't move ecc.. So I learned about the Component pattern and Entity Component System architecture / Game Actors. What I find most difficult in abstracting the various kinds of entities is how to manage the rendering: How can a renderer differentiate between them and update the shader parameters (constant buffers) accordingly? In some cases I need to pass to the UpdateXXXConstantBuffer() method a WorldViewProjection matrix only, in others (shadow mapping) I need to pass a LightViewprojection matrix as well, or an array of bone tranform matrices for animation.

How can a rendering engine be structured to address these issues? Please, don't give general pattern advices, I know the existence of the Component pattern, and the Entity Component System, but I'd like to learn some practical implementation for it. I mean how should an entity be structured so that a rendering process can be performed abstracting away the specific implementation of an entity/actor?

EDIT maybe my uber-question could be rephrased like this: how can I structure a simple but efficient RENDERING ENGINE? I know that there's no such thing as a generic rendering engine, but which are the guidelines (and by that I mean a foundation for an architecture/patterns) to implement one and how does this translate to a component based GAME ENGINE?

Entities nor components need to know about how they should be rendered. The (sub)system should take care of it.

In the picture below the render system collects the data but doesn't render them yet. But rather collects them first, it's basically prepping the commands it needs to render. The collected data can be sorted if need be so objects sharing the same specifics are rendered in sequence to prevent overhead from changing textures/shader programs.

After collecting the data the rendersystem performs the actual calls to the gpu iterating over the array containing all data. The entity at this point is no longer relevant.

Since you're using c++ having simple structs should be sufficient to copy over the data from the components relevant to rendering. You shouldn't need to reference entities/components directly unless you are doing some special cases ( what they might be is entirely up to your implementation)

Here is an article that does something similar with bitkeys 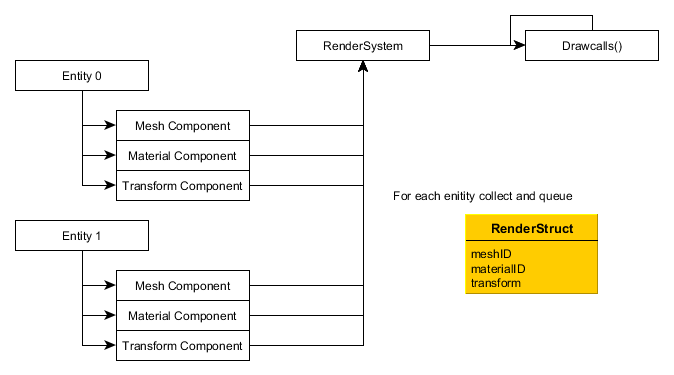 The render struct contains meshID, MaterialID, etc. Which are just index pointers to some static collections of each loaded asset respectively. Which are then plugged into your draw calls.

Of course how you manage and reference assets is up to you. The article I've linked goes into more of the details how they used simple integers to leverage accessing assets.

Im not 100% sure you really understand ECS.

Your renderer shouldn't have all the entities, as other manager systems might also work with the entities (Physics Manager moving entities, influencing your bone transformation, the position in general, etc.), while other aspects of your entities are only used by your renderer (e.g. textures) and others only by other managers (sounds, inventory...).

Now, your entites are only containers or identifier / handler for a group of components. These components are what are interesting for your renderer and managers.

Your entites are handler for all of those compoents and has the option to at least have one those components, maybe even 3 or 4 for some components.

Your renderer needs to know, what components to use and what to do with it. If an entities doesn't have a component, it doesn't try to work with those.

If some components need other components to work, your renderer either needs to know this, or your components have functions on their own to deal with that. In the case, what informations to send to the UpdateXXXConstantBuffer, i would suggest to have a worldViewMatrixComponent, when your shader needs it for an entity, and other components for other cases.

Edit: So first, the renderer iterates over every entity and asks what components it has. Then it calls those components in its wished order. Now, what it does depends on the next thing.

There are basically two different approaches to components in an ECS.

The first approach has the components be called in the corresponding manager. In your example, the shaderComponent loads the shader into the GPU to render the next object, then the renderComponent is called to render the object, using the loaded shader.

As you can see, the shaderComponent doesnt care, what component comes next, as the manager has to know, when to call what component type of an entity.

For example, an entity has a corresponding renderingComponent, but no shaderComponent, the rendering manager would first try to look for the shaderComonent, then, if it cant find it, just use the standard shader instead. If there is no rendererComponent either, the entity will not be drawn. An Entity with only a shader could be something like water effects or other shader effects, that are not directly drawn. Im not that deep in graphics programming, so i may lack better examples

The other method is to just save data in your components. I prefer this type, as it comes with some benefits to it. You can save shaders, textures and models by reference, others by value.

Cons: - less flexible: Your renderer needs a one-fits-all update-function. If the Enttiy has component a, b, c, do this, if it has a and b, not c, do this, and so on.

So, what do you want to do, to start a Graphics Engine. I go the "components have values only"-way

And that is basically it. You cant expend your Game Engine by adding more managers with their own components. Physics Component adds velocityComponent, physicalAttributCompnents (Weight and stuff, if you want it that sophisticated).

Not the answer you're looking for? Browse other questions tagged game-design architecture rendering entity-system .

2
Question about "Entity System" design
11
Entity System and rendering
5
Entity/Component based engine rendering separation from logic
2
Entity system and rendering types
10
How to cache resources in my homebrew rendering system
1
Creating Multiple Render System to Draw Different Entities in Entity-Component-System
0
Why is my render engine only rendering one frame?
3
How do different compositions/types of entities interact in an ECS-system?