On the other hand, the potential benefits of such buttons can obviously be profound. The question is simply: do iOS users actually use such buttons?

One industry-sponsored study claims that only 22% of customers had a positive attitude toward social media advertising, and 8% of consumers abandoned an SNS (Social-networking sites) because of what they perceived as excessive advertising[1].

Schlosser, Shavitt and Kanfer reached the conclusion that users who "actively contribute content" view online advertisements more negatively than users that only consume it.[2]

Another study found that when SNA delivered content or impressions that provided entertainment or informational value, or offered social value, consumers appeared more likely to respond favorably toward the ad stimuli themselves. It also found that "these results suggested that one prerequisite to more successful SNA execution would be for advertisers to create messages that provide some sort of explicit value to [...] users. And by a wide margin, the value that appeared most likely to be highly regarded by SNS users was entertainment".[3]

Activision ran an extensive advertising campaign when releasing Modern Warfare 2, which included (amongst other advertising channels) Twitter, Youtube and Facebook[4,5]. When the game launched it grossed $550M in what Activision Blizzard calls the "biggest entertainment launch ever"[5].

Deviating a bit on the topic, a study by Nielsen Games polled some 534 "gamers" on whether they responded to advertising in games -- 11% said they purchased a brand, 19% said they talked about it and 10% said they recommended the product, 11% said they sought more information. (While no direct comparison rates were offered against other forms of media, 1% of consumers exposed to direct response advertising eventually buy the advertised product.)[6]

Estimates on how much a "fan" or "like" on facebook is worth ranges between 44 cents and $3.60; the issue seem to be that facebook lack the metrics necessary to correctly analyze advertising impacts on-site[7]. Luckily, facebook has agreed to partner with Nielsen Ratings, and Nielsen Ratings are planning to launch a new "Online Campaign Ratings" system that tracks ad performance and audience demographics[8].

It's clear that facebook advertising does have an impact, however; "Texas Pete Hot Sauce" ran a campaign on facebook which allegedly had a direct, measurable and effective result.[9]

There are obviously issues to deal with when looking at this data: it's only tangentially related to the question, there are no major studies done on advertising impact on SNS, and I am not an expert in the field of advertising or the research associated with it (I do know my statistics though).

The Activision ad campaign is largely anecdotal; given that we can't see any impact data, but I figured that the academical standards on gamedev.SE is slightly lower than peer reviewed journals, and as such it might be of some interest.

As for a "personal" answer (remember folks: anecdotal evidence is not data), I'd say that yes, a portion of users will probably post stuff on facebook, if it's either relevant or amusing (for instance, Doodle Jump posts your high score and checks your friends list to see if they have any high scores you can compare against. I'd go with "Friends, Fans and Followers: Do Ads Work on Social Networks?" as the most relevant study for your question. Unfortunately, they reach the same conclusion I do: "Anecdotal evidence indicates that social-networking advertising (SNA) can be effective when users accept it, but the perception of excessive commercialization may lead to user abandonment. Empirical support for these propositions, however, is lacking." and then goes on to look at how users attitudes toward SNA (Social Network Advertising) are affected by things like content, structure and social factors.

I'm the creator of Trainyard for iOS. It's a puzzle game, and when players solve a puzzle, they can share their solution on Facebook, Twitter, or directly on the Trainyard site.

I don't do in-app analytics, but I can tell you that players do use the buttons. You can do a simple twitter search to see the people that have tweeted from the game in the past week: https://twitter.com/#search?q=trainyard.ca

A ton of players press the share button to share their solutions on trainyard.ca without taking that link and posting it on Twitter or Facebook. To date, over 1.5 million solutions have been shared. You can see them here http://trainyard.ca/solutions

I think the Sword & Sworcery is a great example of how to effectively implement social media posting into a game. In this case it was strictly twitter, but I think they owe a large portion of their success to this feature.

Instead of posting scores or progress in a traditional sense, all of the story in the game is broken into 140 character chunks, which the user has the option to share as they want. Other people seeing these random, but interesting phrases showing up in their friend's feeds investigated and checked out the game. It also gave it quite a lot of press and buzz that wasn't directly related to its gameplay.

It offered a way for people to share aspects of their experience without it feeling like an ad.

This article offers a decent summary of how they made it work for their game: http://geraldonascimento.net/sworcery-how-4-four-guys-managed-to-hijack-the-world/

For some more empirical results, the superbrothers team estimates over 200,000 tweets sporting their #sworcery hashtag http://www.swordandsworcery.com/news/2011/6/7/applause.html

In our games, Bunny Shooter and Ant Smasher people use those buttons, not many of them do, as a simple twitter search reveals. But they were easy enough to implement, so we will put them on our next projects.

Personally, I think that it's really annoying when I go to a friend's FB profile or my profile and I see all is this: 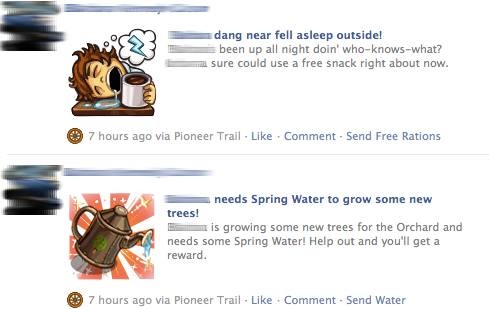 Nevertheless, I think that it is a huge marketing tool that can make your game grow extremely fast. I've seen few games on the iOS that use FB and twitter in their game. One game I've seen that does it the best is Haypi Kingdom, it only posts to your wall when you level up.

Not the answer you're looking for? Browse other questions tagged ios marketing facebook social twitter or ask your own question.