I have to develop a game with a dynamic destruction of the map, I searched the internet and even looked at some questions regarding this topic on this Website, but they did not help me much out.

I made the map with tiled and used box2d to make collision between the game objects. As a game engine we have to use Libgdx, but I dont know how to start as I had never develeped a game before, can someone give me any tipps how I could start?

Okay, the naive approach is this: construct your terrain up of rectangles that are 1 pixel by 1 pixel (or, in the case of one of the 3D worms, of cubes). If you have a bullet, or an explosion, or any other source of destruction, then what you want to do is as simple as applying collision detection, and removing all of the rectangles/cubes that collide with the source of damage. The problem is, this is slow.

But, we can still use the idea behind this, if we're clever about it. The trick is: model the terrain as a larger rectangle. Then, when that rectangle collides with a source of damage, segment it into four smaller rectangles. And apply this recursively until you reach a necessary level of precision (i.e. 1 pixel, 2 pixels, 4 pixels, etc.) When you reach that level, remove all of the rectangles that are still in contact with your source of damage.

Here is an example of how it would look:

Note, that for more complex terrain, you could expand this into other polygonal shapes. However, consider also, that with some thought, you can model the shape of your 2D terrain using procedurally generated rectangles. But that would be a bit of a different discussion to have.

Old Worm games did use the pixel by pixel approach, but this was a bit more understandable in that era. Pixels weren't as dense and per-pixel collision was easy and fast (you could check whether two sprites collided during drawing). Modern Worms actually use something called marching squares or marching cubes. Instead of actual pixels, the map is made out of values between 0 and 1 in a specific density, then the algorithms take this and convert it to a mesh.

You don't need quadtrees for this. If you're not used to recursion, I would suggest an RLE approach like Minecraft uses, because it's simpler to understand: for every vertical column of pixels, store ranges saying where that column starts and ends, in vertical pixel coordinates. Multiple ranges then allow for multiply-fragmented terrain, or what is known in voxel lingo as "overhangs". For example:

Assuming your space is 256 units high, this means this entire column is solid ground, from end to end. Other columns nearby might not be, such as:

Why use only values 0-255? Because that's the range a single 8-bit byte can support, making transfer of such information cheaper (across system bus, across network, etc.). You could also go for unsigned short int, @ 16 bits with range up to 0-16384. Bytes and shorts also make more efficient use of limited CPU cache / line space, meaning you can increase CPU throughput.

Your world consists of these columns, each of which are made up of the ranges described above.

or maybe, if you're willing to limit the amount of vertical fragmentation to make it more efficient: 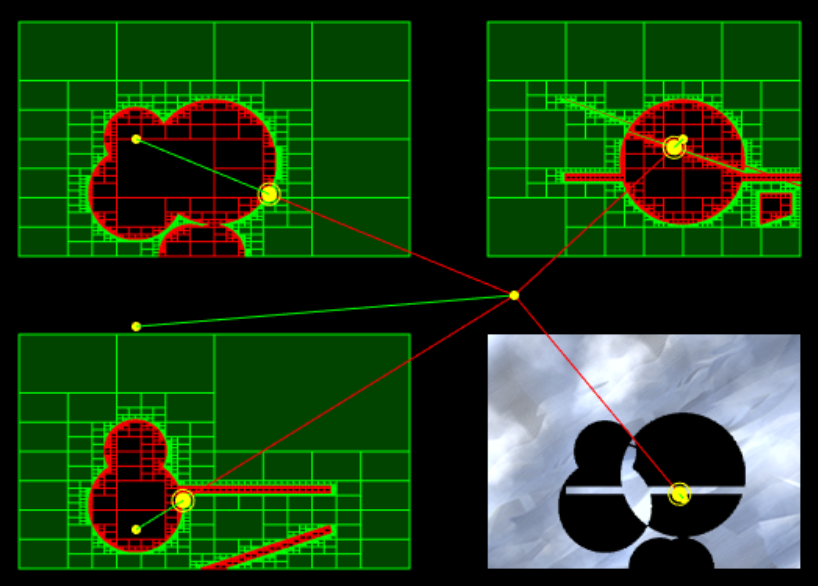 Originally, I've tried using pixel by pixel approach, but it didn't get far until I found its limitations. Aside from performance, the approach seems to limit the bullet to be a point. (e.g. a line or a block shape bullet will be hard to achieve due to performance reasons).

6
How do I store destructible terrain that characters can walk on?