Parts of sprite disappear when zoomed out

I'm playing around with making a roguelike and I want to use ascii characters as tiles in the game. I'm using a 256x256 sprite map where each character ends up being a 32x32 box.

This works fine, however the sprites end up being weirdly drawn, especially when zoomed out. Take a look: 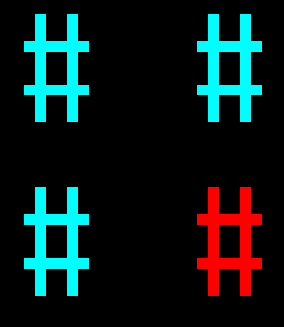 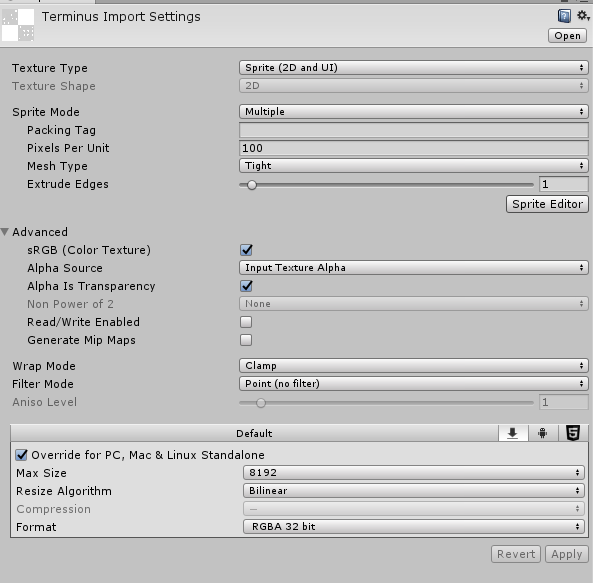 As you can see, only the biggest zoom-in has no weird artifacts in it.

I tried playing around with the settings here and that's the best configuration I can get. PPU at 32 or 256 or even 1 doesn't seem to make any difference. Disabling compression doesn't do anything either.

I've also tried using a sprite map where I resized it so every character is 256x256 but it's still the same problem when zoomed out.

You need to enable Mip Maps and filtering on minimisation.

Point filtering drops entire pixels rows and columns when scaling down (zooming out).

The downside of mip maps and filtering is your sprites won't have sharp pixels anymore and will be blended when zoomed out. You can't have it both ways.

I fixed it by using the DeadSimple Pixel Perfect Camera.

Not the answer you're looking for? Browse other questions tagged unity graphics camera spritesheet pixel or ask your own question.

4
How do I improve terrain rendering batch counts using DirectX?
0
Orbiting a camera around the Y axis whilst remaining up
0
Objects disappear when zoomed out in Unity
1
Scene building for procedurally generated tile based world in Unity
0
Strange warping/shimmering effect with Unity Tilemap and Cinemachine
0
Images disappear when camera zooms in
0
Making 2 Player UI