Collision resolution in case of collision with multiple objects

I have static objects and movable objects. The collisions are detected using the separating-axis-theorem.

For example, in this situation I have two static objects (in red):

and a movable object between the two:

My algorithm is able to compute the collision between two of these objects, and it also spits out a perfect resolution vector (meaning a minimum-displacement-vector) to the collision. 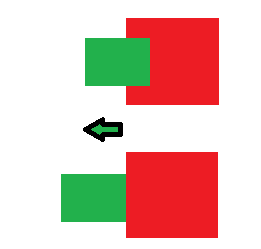 Notice that I just quickly drew this in MSPaint, so in that picture it could actually be that the minimum-translation-vector pushes the green rectangle out on the top, but I'm going to assume here that pushing it out to the left/right is actually shorter.

The general way of approaching this would be to only resolve the collision of one collision per frame, instead of all at once. But in my case, this would result in flip-flopping:

First, the solver detects two collisions but only resolves the collision between the right rectangle and the green rectangle:

Then, in the next frame, it detects only one collision which is between the left red rectangle and the green rectangle, and resolves it:

As you can see, this doesn't actually resolve the collision (for example by pushing the green rectangle out to the top), and instead just flip flops between the two states infinitely.

How can I solve this?

Depending on exactly what you are trying to achieve (high physical accuracy or just a close-enough real-time simulation), you could try using speculative contacts.

Here are the details: http://www.wildbunny.co.uk/blog/2011/03/25/speculative-contacts-an-continuous-collision-engine-approach-part-1/

He describes in that article what you need to know to implement it, and it's very simple compared to other approaches (such as sphere casting and then sorting collision resolutions by time of impact).

If you need/want more, you can purchase his source code for (IIRC) $7.

Here is a video of my implementation in 3D: http://www.youtube.com/watch?v=JvT2H1RmOas

Notice how stable the simulation is with just a single iteration. You could easily use multiple iterations per frame to resolve multiple collisions to a stable state, which would be more accurate.

You can first compute all vectors needed to solve each collision then compute a resultant from them.

The only case when this can byte you is if these vectors nullify each other, just like in your example. In that case the collision cannot be solved.

If you closely look at it, that state of objects is (or should be) unachievable..

i.e. Given the size and geometry of all three objects, and given that all objects are not penetrable:

Now, boils down to it, if your algorithm queries your objects one by one, it then is a matter of concurrency, i.e. in a sense, the algorithm is supposed to check ALL objects at the same time, but the algorithm limits you to do objects and process them one at a time...

A solution you may do is to collect all minimum displacement vectors into an array or whatever data structure you want, and choose one that would prove legal to ALL Objects.

Note that at a given frame, the object (G for instance) can only have ONE direction. (oh man, sounds like the boyband...)

Not the answer you're looking for? Browse other questions tagged 2d collision-detection collision-resolution separating-axis-theorem .

13
What is the best way to handle simultaneous collisions in a physics engine?
2
Tilemap collision in component based entity system
0
Collision detection with multiple polygons simultaneously

1
How can I get accurate collision resolution on the corners of rectangles?
17
Resolving a collision with forces
0
Collision detection with multiple polygons simultaneously
2
How do I resolve a collision involving more than two objects?
3
2D multiple circle collision response
0
How to prevent corner slipping with a shortest axis collision solver
5
2D Platformer Multiple Body Collision Response