Applied force is backward instead of forward when shooting an object

I have this FPS I'm making and I wanted to apply force to objects I shoot at however when I shoot on them, instead of going away from the camera they come towards it.

I don't get it. I could fix the problem by putting a -myTransform.forward but I want to understand the cause of the problem so I can fix it better.

Here's the logic behind the calculation: 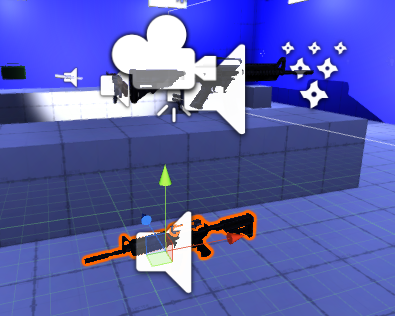 Assuming this is the intended behaviour, everything else in your code seems about right, since you are using object's local axis to apply force, there's a chance one of your object is "flipped". Maybe it's rotated by 180 degrees on the Y axis, maybe it's Z scale is -1 because it's imported model was made that way. That's not necessarily wrong, but it's good to keep an eye one that.

If the only problem is that the imported model is imported in the wrong angle, unfortunately Unity (as far as I know) cannot change that. You can open the imported model on a 3D software (like Blender), and edit the model to look in the desired axis. Then export again in your preferred format, and import it on Unity. If you are using Blender, you can take a look how to do that here.

Okay I fixed the problem:

Not the answer you're looking for? Browse other questions tagged unity c# first-person-shooter projectile-physics or ask your own question.

2
Clamping camera forward and backward vector in Unity3D
0
How to avoid an applied force from effecting one particular Rigidbody2D
0
Gravity vector and forward vector to local heading (yaw), pitch and roll
0
Ray is not shooting forward
1
How to completely stop the camera from clipping into the ground
0
instantiate with arrays of objects and transforms
0
How to reapply force applied to one object to another object
0
OnTriggerEnter works…sometimes