Following on from my question about moving a sprite in a circle, assuming that you have a maze which is shaped like a a set of circles with holes in them and barriers between them.

Location of a sprite is stored in polar coordinates and then translated into cartesian coordinates to be rendered.

Actually, "most pathfinding algorithms" don't rely on any specific set of coordinate systems at all.

Most algorithms, like the most widely spread and probably most popular of them, the A* algorithm, just rely on a set of connected nodes in a graph and functions which estimate or straight up calculate the cost of moving from one node to another.

The awesome thing about this is that they work anywhere, in any kind of space or structure that you can imagine, as long as you have a way of calculating the cost of moving from one node to another.

As an answer to your question: You can (for example) use A* and construct your circle-y maze as a graph where the nodes are simply points on the imaginary circles that run through your maze, and the heuristic functions can still be based on the distance between two nodes.

If you wonder what your graph inside a circular maze should look like (wink wink :P), here's how I would basically do it (the black dots being the nodes and the lines being the connections between them): 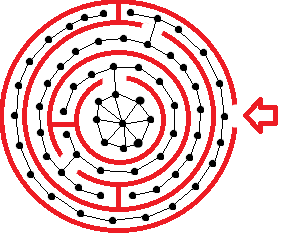 I think my graph even has too many points, since you only need so much that your entities don't run into walls when they try to go straight from one node to another.

The better way to do this would be to use navigation meshes, meaning "surfaces as nodes" instead of just points (in this case a lot faster, since you'd need very few of them) would ). But if you understand how A* generally works they're not hard to implement at all.

Not the answer you're looking for? Browse other questions tagged path-finding coordinates or ask your own question.

3
How do you get an object to orbit around a certain point on a 2d plane?