I am working on some functions to use in my enemy state machines.

Platforms have associated rectangles, and by connected, I mean there is a chain of rectangles from the first rectangle to the second rectangle. 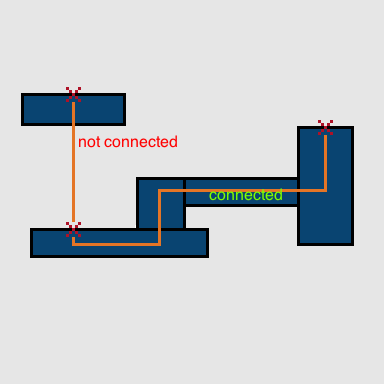 Here are my assumptions:

My question: What is an efficient way to determine the connectedness of rectangles in 2D space?

NOTE: I asked a more specific version of this question in a Godot forum, but given that this is a general game dev question, I figured I'd ask this variation here.

Construct a graph of which rectangles are connected using collision detection and do a flood-fill.

We can represent this graph using an adjacency matrix, that is, a matrix whose indices represent our nodes and which uses 0 or 1 to represent whether there's a direct connection between them.

(Note that platforms are directly connected to themselves.)

In code, we can use a list of lists to represent this final matrix.

So, to build a model of the direct connections between platforms, we can construct a list of lists in the following way (using pseudo-code):

The only tricky thing here is constructing the is_directly_connected_to() function. You can either use the collision resources built into your engine to determine if two platforms are touching, or, use any number of algorithms for determining it two rectangles intersect.

Once we have this graph of the connections between our platforms, we can use one of many algorithms to determine if a path exist between two nodes in the graph.

Alternatively, you can represent the graph using a dictionary-type data structure whose keys are platforms and whose values are lists of platforms, those directly connected to the keys.

Constructing this dictionary representation is easy:

Once we have this graph of the direct connections between our platforms, we can use the following depth-first search algorithm to determine if there's a path between any two nodes in the graph.

(This algorithm is from the Python docs, but it can be adapted to other languages.)

Not the answer you're looking for? Browse other questions tagged 2d path-finding or ask your own question.

5
How to randomly place rectangle inside a larger bounding rectangle without intersecting other rectangles inside
2
How do I handle walking up and down bridges at any angle?
16
a simple 2D rectangle collision algorithm that also determines which sides that the rectangles collide?
7
Algorithm to reduce a bitmap mask to a list of rectangles?
1
Resolving 2D Collision with Rectangles
1
Positioning of AABB / Rectangles
0
What would be a fast way of detecting collision between 2 2d rotated rectangles?
1
Determining and Re-Considering Trapped Targets when Path-finding
0
How to implement wall-following behavior?
0
Contact friction for overlapping rectangles