Why don't my generated instances update when I change their prefab?

I’m making an Editor tool -- a ScriptableWizard -- that instantiates a prefab on a grid. But I find that when I update the prefab, the instances don’t update.

When I instantiate prefabs interactively in the Editor by dragging them from the Project panel to the Scene or Hierarchy, then updates to the prefab affect the instances as expected.

I see another difference between my scripted instances and the ones created when I drag the prefab into the scene: when I do it interactively, the instance in the hierarchy is listed in blue. But the instances I create from script using the same prefab are listed in black, similar to objects created directly in the scene.

Here’s the hierarchy; the “JitterPrefab” was dragged into the scene, and the ones under “gridParent” were instances of the JitterPrefab generated from my script:

Here’s how I’m generating the instances:

When I make a change on the prefab, e.g. change the radius of the Jitter script from 0.025 to 0.25, the manually created instance updates: 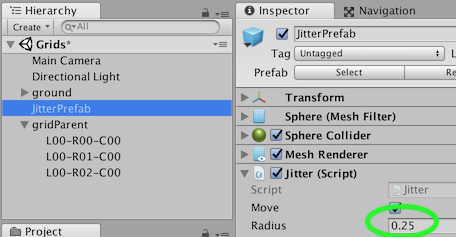 But the script-generated instances do not:

What am I doing wrong? Why are my scripted instances no longer connected to the original prefab? And, separately, how to I tell in the editor (or in script) whether an object in the scene is an instance of a prefab or not?

Not the answer you're looking for? Browse other questions tagged unity c# instancing or ask your own question.

0
Changing one prefab changes all other instances of that prefab too
1
Instantiating prefabs dynamically in script
0
Prefab Instantiates into scene, but when I store a reference to the instance it's null
1
Instantiate Prefab From Script Inside A Canvas
0
Prefabs property is not overriding when changing from editor script?
6
Instantiating prefabs by dragging in scene not working