Why is this stored velocity changing? 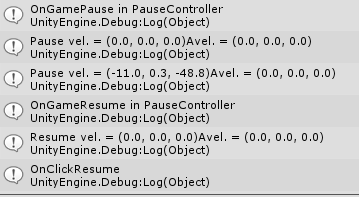 Can anyone give me any idea what might be changing velocity?

Where does OnGamePause come from? the unity documentation reads OnApplicationPause, which is called twice, so i believe that's what causing it. Try copying the vector into a new Vector3, and check if it's set before you do so:

also, i don't think the rb.sleep() and rb.wakeup() are necessary when pausing the game. check this link out: https://docs.unity3d.com/ScriptReference/MonoBehaviour.OnApplicationPause.html

Turns out I was just calling OnGamePause many times due to not limiting input.

3
Relation between "Run in background" setting and OnApplicationPause method
1
Unity: Can't press space to unpause. Is this a Unity UI bug? Or maybe poorly written code?
0
Inline If failing to update variable value
1
Send Messages in Update Function Button UI Unity 5
1
How can i make fade in/out of the alpha color of a material from black to none black?
3
How to completely stop the camera from clipping into the ground
0
Having Trouble holding PlayerPrefs after game restart
0
Menu not disappearing after input