How to find the angle of an arc for reflection

I am using the following code to calculate points for a circle arc drawn with a Line Renderer.

How can I change the angle ang to create a reflected arc along the line P1P2 as in the image below?

Please note that totalAngle represents the portion of the circle that is to be drawn between 0 and 360. 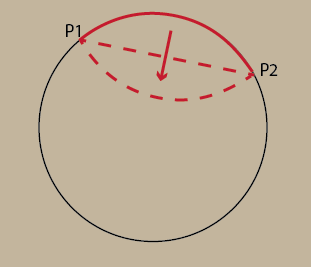 I'm assuming the code handles a special case where the circle center is [0,0] and the arc is drawn is counterclockwise from the point [radius,0].

The idea is to reflect all points across a line in space, defined by P0 and P1, where P0 is the starting point [radius,0] and P1 is the last point on the arc, or [radius * cos(totalAngle), radius * sin(totalAngle)]. Note, if a more general arc drawing algorithm were used, you could place the circle center at the reflected location, as proposed, but you still might need similar math to find that reflected location.

First step, redefine the line as P0 and a unit direction, which is VUnitDirection = normalize(P1-P0). Second step, move each point into a coordinate space where P0 is at the origin, which is PRelative = (P0-point). Third step, project the point onto the line, by finding how far along the line its projection lies, which is SAlong = dotProduct(PRelative,VUnitDirection), and then find the actual projected point by moving along the line that distance, which is PProjected = P0 + (SAlong*VUnitDirection). The distance between the original point and the projected point must be traversed twice to reach the reflected point, so calculate VOffset = PProjected - point, and finally, PFinal = PProjected + VOffset.

The code below is tested in 3ds max using the MaxScript language, a personal preference for prototyping. Note array access is 1-based, so a[1] is the first element of an array.

4
Moving a 2D object along circular arc between two points

2
Getting the angle between three points?
5
How to rotate a parent object while rotating a child object to a certain angle using coroutines
2
How to rotate an object around one end of line till its lies on the line
5
A coroutine to rotate one point around another by a given angle without referring to game object
3
How to move bezier curve points along circle to form a symmetric curve at center
3
Improve velocity obstacle calculation algorithm/performance
0
Find random point on a circle with a radius of x and the players position as center (unity)