Touchscreen controls for a game

I made a pc game recently (uni project) and now I want to put it on google market but I am having troubles changing original controls to touchscreen. The problem is that I don't really know what I can use for controls (tap, double tap, etc.) so the app is really easy to use. I will be incredibly grateful if you could share ideas for what types of controls can be used for my game.

In the mobile version, the player controls the shield with his finger. It creates two problems: the player is not able to see some of the obstacles because his hand covers some parts of the screen. Also, it means I cannot use simple tap (or at least I don't know how) for shooting, which makes the controls unintuitive. To shoot the player has to touch the screen with two fingers. It is not a common gesture, so people won't think of using it straight away unless told what to do. And the main point of my game is that there are no words at all and people are expected to understand controls without any tutorials. Also, the game relies on quick reactions, so controls cannot be complicated. 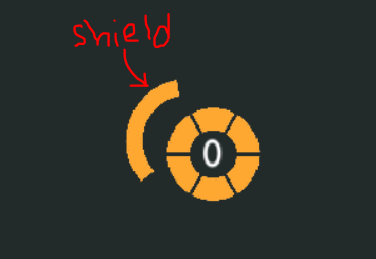 Regarding Movement: As Bálint suggested in a comment, move the shield by pointing it away from where the user holds their finger. It might be a bit more difficult to implement, but I think you could get even better results by allowing the player to have their finger anywhere. Don't track the absolute position of touch events, track the relative finger-movement of drag gestures. When the user drags their finger 45° around the center, also turn the shield by 45°. Think of the whole playing field like a record turntable.

An immediately obvious interaction would be to use accelerometer input. As the user tilts their device, they would see the shield moving, and they can’t help but tilt it a little bit while holding it. Then just use tap to shoot. No hand getting in the way normally.

The simplest solution for the problem of fingers touching the visual part of the screen is to place the controls in a location separate and distinct from the action.

"Reversing direction" for the shield might work, but I imagine from your description that "enemies" could easily appear from any angle? So having your thumb anywhere near the "circle and shield" would obscure potential "enemies". The only solution, if that is true, is to place the controls in a separate location. A simple circle at the bottom that you slide your thumb around would work well.

For the problem of having two controls using one finger, two solutions present themselves.

If you don't want the players hands covering the screen, it would be a good idea to move the controls away from the action or make the touch input instantaneous like using taps.

So for movement you can have the player tilt the device, or just tap the direction they want the shield to cover.

And for shooting you might want to implement automatic shooting so if the shield faces an enemy it shoots it or the player can tap on an enemy and the shield would move in that direction and shoot.

But regarding design questions like this it is pretty hard to come by a perfect solution.

So what I would recommend is to implement multiple ways to control the shield and letting the player choose which one they like.