How to create a 2D physics waterfall

I am trying to create a waterfall that looks similar to the first image below (please check this video for a better idea of what I want to achieve) with physics properties so it can move or around objects with colliders on its course (similar to the second image below). Though the linked waterfall is 3d I am interested in a 2d implementation.

Note that the objects are dynamic and some move frequently hence the waterfall has to reshape every frame. The objects move slowly either moving to different positions or rotating. How can this be done? 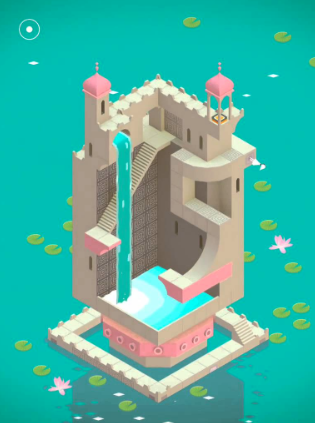 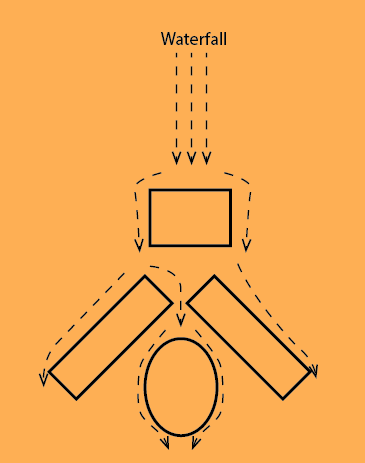 I wanted to see if I could pull this off without dynamically regenerating the mesh for the waterfall every frame. It turns out, there is a way. :D

Each object that can block the waterfall (objects bearing a WaterCatcher script in my prototype) has an outline mesh wrapping around its perimeter. (This can be auto-generated in advance using the collider's shape)

Then the vertical falls are just basic quad primitives, stretched to the appropriate length. I use another shader to scroll the waterfall texture over the falls and fade it out at the top & bottom ends. Then I layer on a foam particle system at the impact point to help cover the blend.

Here's a close-up so you can see the component parts. 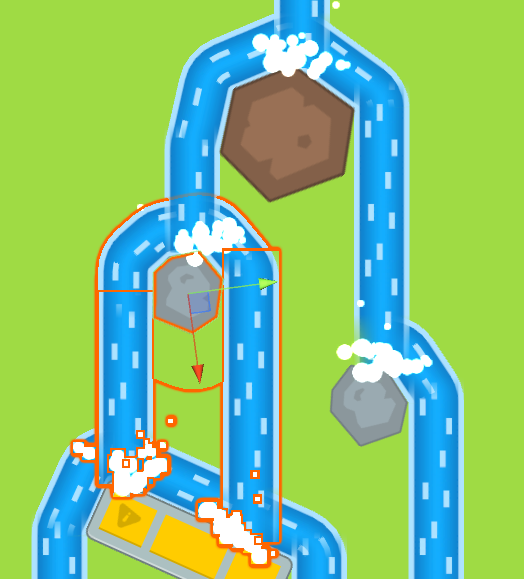 At the top I have a "root" waterfall to kick things off. Each frame, after all the Update() scripts have run to move things around, it fires a CircleCast downward, to see if its water hits anything. If it hits a WaterCatcher, it tells it to show its water skin downstream of the hit point.

I determine "downstream" using the hit normal - if it's very close to vertical, or if the incoming waterfall spans edges that slope in both directions, then we spill both left and right.

Each WaterCatcher has a left and a right waterfall of its own, which it enables and positions on its far edge if it's spilling in that direction - otherwise they stay hidden. These waterfalls in turn fire CircleCasts downward to find what they spill onto, and so on...

The prototype still has a few visual glitches that could be improved - the water flow along an object pops on all at once instead of animating, and the flow rules could use a little extra tolerance or hysteresis so it doesn't cut off as easily on rotating objects. I think these should be fairly solvable issues though.

Here are the tricks I use in my water catcher fragment shader:

No easy solution with good performance.

Result of particle system: (To change the values I had to wait about 3-4s, it's slow)

8
Top down space game control problem
1
How to move objects with different y positions by a certain number of units
0
Unity 2D Input.gyro eulerAngles X value strange behaviour
5
How to rotate a parent object while rotating a child object to a certain angle using coroutines
2
Unity2D: Wrapping a line around an object
0
Why RaycastAll misses some objects?
2
Problem while creating balancing board using Unity physics
7
How to create an illustrator/photoshop-like pentool for creating bezier curves in Unity