I'm making a game and I wanted to simplify some code by taking advantage of linear algebra. I'm a little stuck. 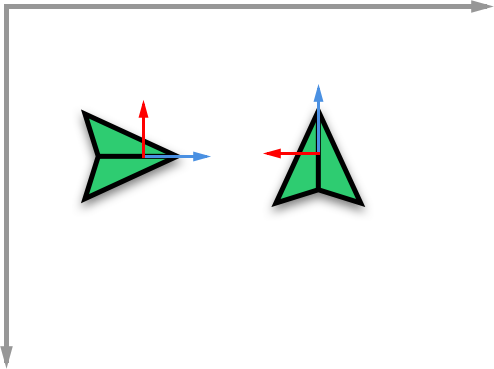 I want to define some basic movements for my player, like forward, backwards, and strafe. Currently, I have these movements defined with respect to the the gray coordinate system. So if we take the first green triangle for example, giving it the "forward" command would correctly move it to the right.

I tried accomplishing this by defining an arbitrary coordinate system on the player.

Whenever the player rotates $\theta$, I compute the new axes for the player.

So, I'm confused about what it means to define a arbitrary coordinate system with respect to some object (which rotates and translates with the object), that resides in another static coordinate system. I'm not sure if I'm using the right vocabulary here, so please correct me if I said anything wrong.

And out of curiosity, can we model this as a “change of basis”? I’m guessing no since the transformation can be nonlinear.

Browse other questions tagged mathematics geometry coordinates or ask your own question.

23
How to deal with differences between 2D screen coordinates and Cartesian coordinates
4
Obtaining a world point from a screen point with an orthographic projection
1
Rotating coordinate system
1
Interpolation between two 3D points?
3
In a TPS, how to aim bullets to the direction the camera is pointing, but make the shooting from the player?
9
BRDF and Spherical coordinate in ray tracing
3
Coordinate system for a strategy game
1
Convert global 3d coordinate system to a local one with specific direction
0
Unity: AddForce in transform.forward direction not working as expected