How do I prevent tile tearing effects when using pixel art in XNA/MonoGame while keeping the low velocity of the player?

Most of my Texture2D are pixel art, meaning they're rather small, so my player/character's position has to change using decimal points to keep a realistic movement that matches its walking animation.

But the problem comes when I use my 2D Camera class (using a transformation matrix) to follow the player's position with a scaling/zoom multiplied by 4 (to enlarge all the art). It ends up causing some of the tiles to offset or extra pixels to appear in source rectangles which don't belong in the tile: 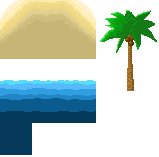 And these are the extra pixels that don't belong in the source rectangle that start appearing when the camera moves with the player: 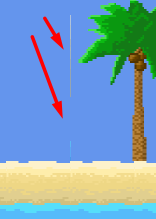 I realized later that the camera position works better when using int values over floats, but not having it use floats makes the movement of the camera very rigid when zoomed in that much.

Edit -- This image shows the few extra lines that gets drawn when they shouldn't when the camera's position is at specific coordinates:

I have had this issue before when using floats for my Vectors when passing it into to a spritebatch.draw function. This issue is still present Monogame and was present in xna. You Can still use floats for velocity just cast the values as ints.

Try this in your SpriteBatch.Draw().

All you have to do is cast (int) into your sprite positions.

1
I need help with specific types of movement
8
How to create a XNA texture from a GDI Image with source rectangle?
1
Problem with position for player and 2D camera
9
Sprites rendering blurry with velocity
1
Update Camera manually after Camera's target updates, bypassing the game loop. Is this a good or bad practice?
0
2D Platformer Collision Detection Issues - XNA
0
Main camera transform.forward becomes up and down when looking from above
0
How to flip a rectangle