I'm working on some procedural content for Unity3D - in C#

My main aim is to build a flat plane (or maybe later a terrain / mesh), with a single river running through it, based on a seed value.

I will keep the river throughout, but I will have 2 versions of a settlement, one medieval, later one urban city-like.

The over-arching function is basically:

I will probably populate both with generic assets from the asset store or similar, and hopefully will layout the buildings with a decent algorithm.

The plan is to maybe treat Voronoi cells as farms for the Medieval time, and then switch form Euclidean Distance formula to Manhattan Distance Formula later for city road generation (but always keeping the same river)

I've converted the 2D code to generate a visual 3D Voronoi Diagram to help me learn the process and how the classes all work.

2D Voronoi, applied to a Texture2D, dots are 'sites' 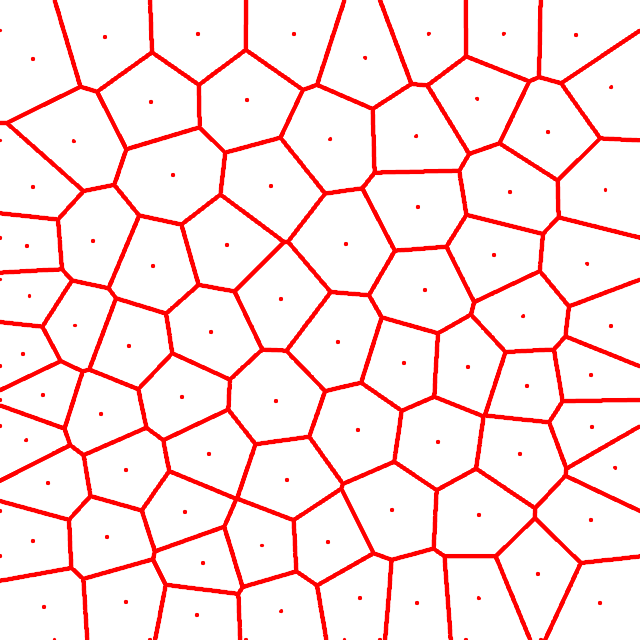 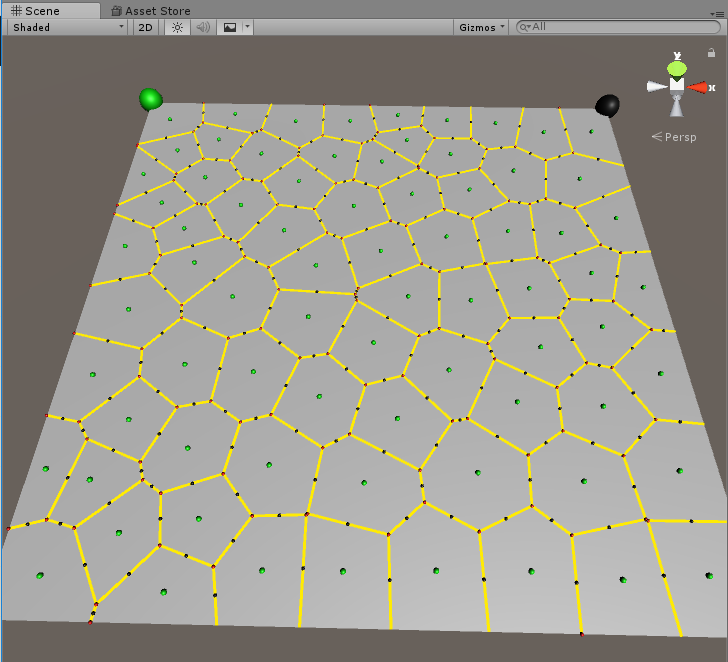 I'm struggling with my next step from a planning point of view. In order to build a river through the diagram that looks reasonably well, I might use the method explained in Amit Patel's great procedural tutorial whereby splines are used, from edge midpoint to midpoint. and pick one arbitrary vertex on the north side, one on the south, and perform Dijkstra's algorithm to find the "best" (shortest) path for the river. 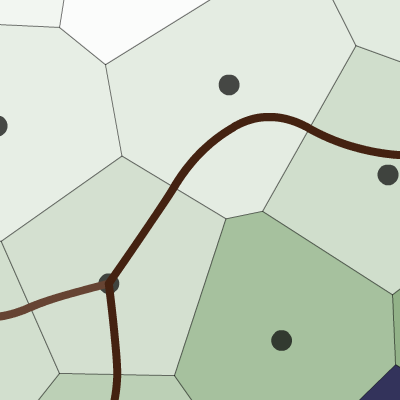 I have found a couple of very good spline tutorials such as the one from CatLikeCoding's AMAZING Curves and Splines tut.

but while writing this question I realised I have another option, I can just trace the edge midpoints and the cell 'sites' as in the image below, and increase the polygon (voronoi cell) count to make the river lines seem less angular. it's basic, but should work. 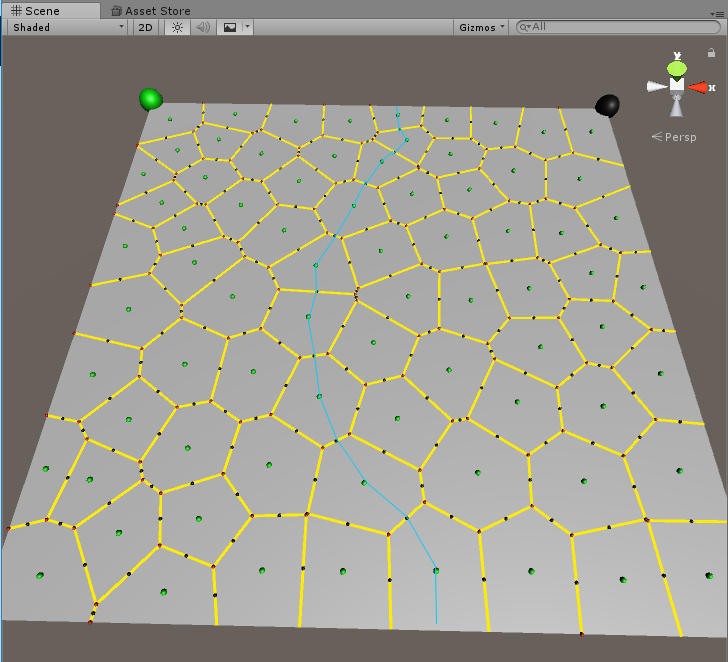 So my main problem now is analysing what to do next.

In theory I could stay working in 2D, build a texture that has rivers and maybe roads, maybe pick more pixel colours for trees, rocks etc, and then instantiate the necessaries into the 3D world. But I'm not sure this is the best approach.

I could instead generate a 3D river using some of the great code explained in "Unite 2015 - A coder's guide to spline-based procedural geometry" and embed it onto a plane or similar, but it's at this point I am getting stuck in analysis paralysis. I can't really decide/determine at a high-level the best way to move forward.

The main questions I am struggling with:

Why a flat terrain ?

I suppose it might be easier to maintain across the medieval and urban landscapes.

A nice-to-have would be some perlin-noise based terrain, which seems reasonably easy to generate a heightmap and build a terrain from there, but I'm pretty sure I will struggle to get any river algorithm I create to conform to the terrain properly, so I might stick to 2D for the moment.

I need to do this as much in code as possible, and hopefully I can write much of my own code rather than relying on libraries. However I'm not asking for any code help, just some advice to get me out of a rut, if anybody can help I would really appreciate it!

I realise that this sort of question may not be fitting the correct pattern for questions on the site, in which case I apologise, and you can close it off early.

Many thanks in advance.

Why don't you just use the existing straightedges between each unique pair of voronoi cells - which are already natural boundaries - as river cells? You can just expand them widthwise, twist / splinify them and... voilà? You now have natural boundaries without having to split cells?

Your third question about meshes consists entirely in how you are going to use them. For now I would keep a separate mesh, but have superstructures that point the the start and end vertices of each island - we call these submeshes - within that greater mesh.

As for your third question, neither are we. How can we be, when we have no idea what you'll be doing with them? These are the kinds of things you have to make your own road with - we all do. What I can say is you would probably be better off laying out buildings in a separate mesh so you can turn that view on and off while rendering, allowing you to see terrain more clearly.

Lastly, why flat terrain? Because it is always wiser to start with planar - which is computationally efficient and easier to reason about - and go to varying heights later, as in a heightmap. The one exception can be where you wish ultimately to have overhangs in terrain, e.g. in MineCraft - but even there, heightmaps are used as an intermediate structure e.g. in LoD and lighting.

Conclusion With this many ifs and maybes in your question, there is no way to do much better answers than that given here.

Not the answer you're looking for? Browse other questions tagged unity procedural-generation splines dynamic-mesh delaunay-triangulation .