Unity collisions often have exaggerated physics, sending the player flying off the scene

The car movement works fine over a flat surface and even over gently rolling terrain. It's a city environment, and there are lots of small lips and angles where the street meets the sidewalk, where terrain ends, and around ramps and other features.

When the car hits one of these small seams in the ground, 60% of the time it flies up in the air over the buildings, rotating like crazy. It often flies off the game world. When going off a ramp, sometimes the car will continue driving forward and rotating up on the x-axis in mid-air, as if it's going through an invisible loop-the-loop.

I'm not sure what's causing the extreme physics reactions. 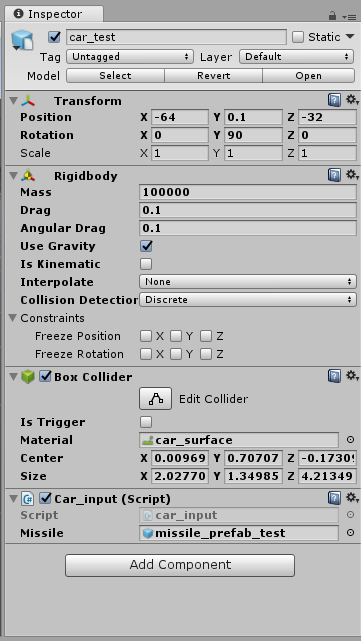 And here's the car's movement code:

Any ideas are appreciated.

There was a ton of extra code in here attempting various fixes, including trying to manually restrict rotations on the z and x axes, to reduce velocity while airborne, to use several alternative types of movement code, and to increase the car's mass to a ridiculous amount. None of them ever worked, so I've removed them here.

By request, other solutions I've tried:

All the world geometry is currently just built from Unity primitives.

It was the gravity.

Based on the video DMGregory linked to, I realized my game has "floaty" physics, as the speaker describes it.

I did some research and found out Unity lets the user specify the amount of gravity in the world under Edit -> Project Settings -> Physics.

I changed mine from -9.81 to -30 and now the game runs great. No more flying cars. Maybe my city was modeled on a much smaller scale than what Unity was expecting. It makes me wonder what the correct Unity/Blender units-to-feet ratio would be for a game to feel realistic with the default gravity.

I also found a bug in my physics code related to a function I wrote to flip the car with a key press if it's been turned upside-down or on its side. I wasn't reducing the vertical velocity in certain situations, resulting in a lot of excess bounciness when using that function.

Not the answer you're looking for? Browse other questions tagged unity collision-detection physics car .

3
How do I move a 2D top-down racing camera smoothly and show what's ahead of the player?
4
2D Tile-based Collision Detection
0
3D collision physics. Response when hitting wall, floor or roof
11
How do I prevent raycast car wheels sliding sideways?
3
Player Flying after colliding - Unity
1
Problems applying movement to a RigidBody in Unity
3
How to completely stop the camera from clipping into the ground
0
Unity Checkpoint System that remembers NPC interactions + Environment changes?
0
Simulating Road Traffic/Overtaking - Overtake works mostly, but starts clipping other vehicle